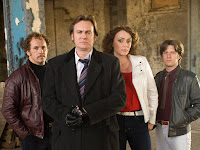 What with ABC's adaptation of Life on Mars entering its fourth week (though, as I said earlier, the ratings are not good for the imported format), I thought it was time once again to tackle my thoughts about BBC One's spin-off of Life on Mars, entitled Ashes to Ashes, which began production on its second season earlier this month.

I had reviewed the premiere episode of Ashes to Ashes when it first aired on BBC One in February, but since then I've had the opportunity to watch all eight episodes of Ashes' first season and fall under its 1980's New Romantics-influenced spell.

What is Ashes to Ashes about? Like its parent series, Ashes to Ashes follows a modern-day detective seemingly sent back in time after experiencing a life-threatening trauma. In this case, the detective is DI Alex Drake (Keeley Hawes), a forensic psychologist who interviewed Sam Tyler before his suicide. When Alex is shot in the head by a stringy-haired perp singing David Bowie's "Ashes to Ashes," she is seemingly propelled backwards in time to 1981, a few months before the death of her parents in a car bomb, where she encounters the familiar face of Gene Hunt (Philip Glenister). Like Mars' Sam Tyler, Alex has a distinct reason for doing everything in her power to return to the present day: her daughter Molly (Grace Vance) is alone and Alex may be seconds away from dying.

Ashes to Ashes manages to be both more humorous and more sinister than Life on Mars. Like Life on Mars' Test Card Girl, Ashes to Ashes has its own spectre haunting the subconscious of Alex Drake: the terrifying visage of the Clown (Andrew Clover), an Angel of Death who resembles Bowie's appearance in the music video of "Ashes to Ashes."

So crank up some David Bowie and Roxy Music on your iPod as we dive into some burning questions left over from Ashes to Ashes' brilliant first season. (WARNING: for those of you who haven't yet seen the series, proceed with caution as there are major spoilers for Season One after the jump.)

My very first question, after watching the full first season of Ashes to Ashes, naturally concerns the first season's ending... in which we learn that Young Alex had met Gene Hunt before, seconds after witnessing the death of her parents and that it had been Gene's hand (and not Evan's) that she had gripped in the hallucinatory memory flashes Alex kept experiencing.

The fact that she knew Gene in the past is significant: if Gene was actually in Alex's past, then he must be a real person and is not, as Alex keeps maintaining, a fictional construct. So is he real? And, if so, is he still alive in 2008? Alex has believed that 1981 is a series of puzzles devised by her subconscious to keep her mind struggling to survive rather than succumb to the darkness and cold of death. Has she then always carried a memory of Gene Hunt around in her subconscious, unaware of his significance in her life? Is this world a puzzle for her psyche as it resists shutting down or has she really traveled back into time?

I had figured out both the Clown's identity and the motive behind Alex's parents death a few episodes before the season finale. Watching as her father put "Ashes to Ashes" on the cassette player, Alex is stunned to see him remove his glasses and transform into the Clown seconds before the car explodes. So my question is this: did Alex again *always* subconsciously know that her father had planned to kill her and her mother in a pathetic murder-suicide as payback for her mother's affair with Evan? I'd suggest that she did and that her memory filled in the blanks in her subconscious that she had successfully managed to repress for so many years.

But if the Clown is her father and an Angel of Death, why did Shaz (Montserrat Lombard) see him rather than another personification of death when she was nearly fatally stabbed in the series' seventh episode ("Charity Begins at Home")? And is the Clown still significant now that Alex knows who he actually is? Is his power over her now nonexistent now that she's peeled away the mask from his face and seen the skull beneath the skin?

I had always thought it was interesting that the song that was playing when Alex woke up in 1981 wasn't Bowie's "Ashes to Ashes" but rather Ultravox's "Vienna," which is why I was so glad to see that the writers saved that song for the moment of her parents' death, a soundtrack to their demise that makes it far more iconic and significant to Alex and alludes to why she sees her father as the Pierrot Clown rather than in some other incarnation.

Lastly, as I mentioned earlier, Gene Hunt is an actual physical person in Alex's life as a child, so is he the reason that she was pulled backwards to 1981 and why Sam Tyler was pulled back to 1973? In both cases, Alex and Sam arrived in the past just prior to a critical incident in their lives that lead to their psychological development as adults. And yet in both cases Gene Hunt was on the scene, despite Mars taking place in Manchester and Ashes in London.

So, why is Gene significant in both their stories? And is Gene more than just a common link but a means for them to latch onto that particular point in time? And is it important that in 1981, Gene is struggling to maintain relevant in a world that is changing around him? If Sam thought that 1973 was his Oz, is 1981 Alex's Narnia, a journey to understand the critical incidents that defined them later as adults? For Sam, it's a need to follow the word of the law, to enforce the concept of justice. For Alex, it's the need to find logic and meaning in the criminals she chases, to understand the flaws in their psychology... even as all along she's been trying to discover what deficiency in her father's makeup lead to him seeking to obliterate his entire family.

And how does this connect to Arthur Layton, the man who created the car bomb that killed Tim and Caroline and who Alex arrested in the first episode of the season? The man who, I might add, shot Alex in the present day... after calling an unseen person. Just who does Layton call as he leads Alex away? ("I've got a piece of your past standing right here in front of me. Tim and Caroline Price's daughter. And I'm going to tell her the truth about why her parents died... Well, that's your choice.") His words seem to perhaps indicate it's Evan, but what if it's someone else altogether different? Some other force at work perhaps? A sign of something else yet to come?

Anonymous said…
I thought they did a really excellent job with this spin off and embraced what made Life on Mars great while still letting it be its own unique creation.

Keeley Hawes is wonderful in the lead role and I love the sexual tension between her and Gene. And, like with Life on Mars, they have gone out of their way to create another era and they do it superbly. And, somehow, they've managed to make the eighties cool!
10/29/2008

Anonymous said…
I too loved how "Ashes To Ashes" was funnier yet creepier than "Life on Mars." I really liked both shows but found "Ashes" far more entertaining.
Hawes and Glenister were wonderful and while the writing was occasionally clunky (I actually felt sorry for the actors sometimes), I'll definitely be back for the second series.

As for BBCA? I'll never figure out what they're aiming to do. There are a myriad of scripted dramas they could be airing but they persist in doling out some really dire reality shows five days a week.
I want them to air "Ashes" but I fear what they'll edit out.
10/29/2008

Anonymous said…
I'll second that. BBCA seems to have no idea these days how to program a network and keeps filling it with reality junk that I won't ever tune in to watch. There was a point where they seemed to realize that people wanted original SCRIPTED fare and now they are filling the lineup with crap that must be cheap. What the hell is going on over there?
10/29/2008

joy said…
Oh, noes. I tried hard to be good about not spoiling myself for UK LoM spoilers, so I should have stayed away from this post, so that I wouldn't know what happened to Sam.

joy said…
Mind you, it just means I'm backburning the heck out of the UK versions of both, and watching during next summer's lull.