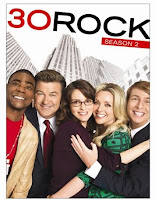 There are few things guaranteed in this world: death, taxes, and the fact that NBC's 30 Rock will consistently make me laugh more than any other series on television right now, with its winning combination of absurdist humor, off-kilter characters, and brainy throwaway lines. (What other series would have jokes about H. R. Halderman, Bernie Goetz, and Mystic Pizza, I ask you?)

Universal Home Video releases 30 Rock's Emmy Award-winning second season on DVD today and it's easy to see just why 30 Rock works when watching these 15 episodes (save for the shaky "Ludachristmas" and "Episode 210" episodes, filmed during the writers strike without rewrites; hell, the latter doesn't even have a name!), which comprise some of the very best comedy writing to be found on television.

While at its center, 30 Rock appears to be about the deeply dysfunctional cast and crew of a fictional NBC sketch comedy series, it's actually also a delivery system for insightful and cutting humor about political, social, and gender issues and a look at the sacrifices professional women have to make in the workplace. Liz Lemon (Tina Fey) might not be the most put-together woman working in the entertainment industry but you can't help but root for her as she strives to find a balance between her professional and personal lives, which often include fake pregnancies (spurred into a false positive by her beloved Sabor de Soledad Mexican cheese curls), nearly getting thrown under a subway car by ex-boyfriend/Subway Hero Dennis Duffy (Dean Winters), and, well, eating an entire sandwich on camera in order to get past airport security to stop the potential love of her life, Floyd (Jason Sudeikis). Like I said, Liz needs all the help she can get.

She's helped and often hindered by her boss, Jack Donaghy (Alec Baldwin), who this season dates a Democratic Congresswoman from Vermont, Celeste Cunningham (Edie Falco), who is suing NBC parent company Sheinhart Wig Company after they poisoned a river with wig dye that turned many children orange; he also engineers the biggest NBC ratings success story with MILF Island (even after Jerry Seinfeld threatens to buy NBC for $4 million when Jack has him digitally inserted as the series' host) and takes a position with the Bush administration when he's forced out of his job by his longtime rival Devon Banks (Will Arnett), who is engaged to the daughter of Jack's comatose mentor Don Geiss (Rip Torn). Whew.

Fey and Baldwin turn out two of the most memorable comedic performances of recent times; both of their characters can manage to be over the top, complex, and likable, even when they're engaging in some not-so-likable behavior. It's the push and pull of their complicated relationship (dare I say, even friendship) that propels the plot of 30 Rock and keeps us coming back for more. Together, they comprise a paradigm of authority vs. oppression, creative vs. corporate, male vs. female. (It's awe-inspiring to watch them in action, particularly when they are willing to cast aside any boundaries in their performances, such as when Jack channels great black TV performers of the past in Tracy's therapy session in "Rosemary's Baby.")

Equally fantastic is 30 Rock's supporting cast, which truly gets a chance this year to shine as Jenna (Jane Krakowski) gains a massive amount of weight while starring on stage in a musical version of Mystic Pizza, Kenneth (Jack McBrayer) battles evil head page Donnie, Pete (Scott Adsit) tries to reconcile with his estranged wife (while still living with Liz as her roommate), and Tracy (Tracy Morgan) creates the first porn video game, in between other misadventures. Each of them gets more than a few opportunities per episode to shine, and series' writers virtually offer up a manual on how to incorporate a sprawling cast of characters and still make them relevant each week, from ditsy Cerie (Katrina Bowden) and uptight Toofer (Keith Powell) to scumbags Frank (Judah Friedlander) and Lutz (John Lutz).

The second season of 30 Rock, while sadly shortened due to the writers strike, offers up many memorable episodes, including some of my particular favorites in "Cougars," in which Liz dates a much younger coffee boy, Jack and Tracy coach a little league team in Knuckle Beach, the worst neighborhood in New York, and Frank believes he's gay, "Somebody to Love," in which Liz suspects her neighbor may be a terrorist and Jack falls in love with someone of the opposite political persuasion, "Sandwich Day," in which Liz gets a visit from ex-boyfriend Floyd and must consume that aforementioned sandwich (and dipping sauce), "Rosemary's Baby," where Liz teams up with a former old school comedy writer (guest star Carrie Fisher) to take on every possible political target and Jack helps Tracy give up dog fighting (it also coined the now-memorable phrase "Never go with a hippie to a second location"), and "Cooter," in which Jack discovers the sad state of the Bush administration when he takes a job in Washington and strives to get pens for the office... and willingly creates career suicide by creating a "gay bomb."

It's hard to pick one favorite when you've got so many to choose from and that is reason enough to buy 30 Rock on DVD today. I could watch these episodes over and over again (and have on many occasions) but the folks at Universal Home Video have also loaded the two-disc box set with a host of extras, including the 30 Rock staged reading at Uprights Citizen's Brigade in New York (which raised money for the series' out-of-work PAs during the strike), deleted scenes, audio commentary, the Saturday Night Live episode hosted by Tina Fey, and the 30 Rock event at the Academy of Television Arts and Sciences. (Sadly, no full-length video for Tracy Jordan's Halloween hit "Werewolf Bar Mitzvah" can be found on here.)

But my absolute favorite extra has got to be the "Cooter" script read-through, which presents not only video of our beloved cast at the read-through but also the original script presented on-screen for viewers to read along with. It's a fantastic bonus feature, giving the audience a peek behind the curtain at 30 Rock and some insight into the comedy writing process to boot.

All in all, 30 Rock's second season proves to be one DVD that is a must have for your television collection.

30 Rock Season Two is available for sale today with a suggested retail price of $39.98. Or get it at for only $26.99 in the Televisionary store!

Anonymous said…
I forgot how many fantastic episodes there were in Season Two and how much happens! I do wish we could have seen what "Ludachristmas" and "Episode 210" would have been like if the strike hadn't happened. The storylines are great but you can tell that the humor would shine more with a polish or two. Still, all of the other incredible episodes make up for it!
10/07/2008

Esther said…
I loved Season One but I actually thought Season Two was even better, the humor was wittier, sharper-edged. I was on the fence about picking up the dvds but the extras sound great.
10/12/2008