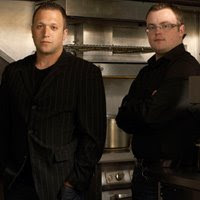 As a restaurateur, you do need to be prepared for anything, whether that's the appearance of vegetarian, a celiac, or a group of discerning--or rowdy--diners. You need to keep your cool, keep the dishes flying out of the kitchen, and keep the quality up. You can't be distracted or indeed derailed by unusual requests.

On this week's episode of BBC America's deliciously addictive culinary competition series Last Restaurant Standing ("Tricky Customer"), the past came back to haunt the three remaining teams as Raymond tasked the couples with creating some special offerings in their restaurants and... and accommodate a slew of customers with some strict dietary needs at the very last minute.

With only three teams left in the competition, the pressure is on each of the couples to perform well above expectations, even when Raymond Blanc throws a spanner in the works and pushes, say, a table of vegetarians and vegans into your restaurant at 8 pm on a weekend. In this day and age of serious food allergies and dietary restrictions, diners expect a level of service, even when making specific requests and they expect those requests to be carried out in a professional and courteous manner and, above all else, they expect that their dishes still be at the same level of taste and presentation as everyone else around them.

So how did the teams perform this week when faced with some very tricky customers? Let's discuss.

Tim and Lindsie. Tim and Lindsie really had a mixed bag this week. I thought their idea of giving a rustic-looking little packets of radish seeds and a recipe for the warm radish salad created at True Provenance was a nice touch that spoke to their cooking aesthetic and the mission and brand of the restaurant. And I was really quite happy to see that Lindsie, while emotional at seeing her son Noah for their weekly visit, didn't let her sadness derail her from the competition as she placed her focus on attempting to create a better life for her son through this amazing opportunity. Even when faced with mounting pressure, Lindsie kept her cool and dealt with putting out the many fires that broke out over the evening, the biggest of which was that aforementioned table of vegans and vegetarians. The duo offered an amuse bouche of an essence of tomato with soft herbs... which Raymond quickly recognized as one of his own recipes that he created eight years earlier. Eeek.

What upset me was just how completely Tim underestimated how many vegetarian or vegan guests they might have in that evening as guests. With several hours to go before service, Tim opted not to bring in any additional vegetables or create several dishes that would work for vegans or vegetarians. Hell, he could have just created one dish that might work for both sets of dietary restrictions, offering up a tasty--and filling--vegan dish that lacked any meat or meat by-products such as butter or cream. But to offer them a dish of sauteed cabbage, which at the best of times would only really count as a side dish, and a warm radish salad? Really? As an actual entree?

I understand that True Provenance serves mainly meat but Tim only created three of those portabello mushroom and creamed spinach pies and quickly devised a turnip bake for the vegetarians and didn't even consider the vegans at all. He had time to get out there (or send someone) to pick up some local veg to create a new dish that would have worked but he definitely should have been better prepared overall for any contingency, considering he did have notice of this occurrence in advance. One diner goes so far as to leave to buy a packet of nuts from a local shop because she was so hungry, while another said described Tim's attempts at vegetarian cooking as "school dinners." Ouch. And then he ran out of poached pears for the vegetarian dessert. And Tim ran out of most of his proteins on the menu and ice cream, which is a serious problem that they seem to encounter time and time again. Badly done, really.

Russell and Michele. The duo offered cocktails with champagne and hand-picked cherries for their little customer delight, as well as a delicious fava bean crostini amuse bouche that looked absolutely amazing. Plus, they offered a little gift at the end of the meal: a recipe from The Cheerful Soul, tied with a ribbon, so that guests could recreate one of the dishes at home.

What irked me was that Michele knew that that least one celiac was coming in for dinner that weekend. She should have been much, much better prepared for this situation in advance, had reviewed the menu ahead of time with Russell to determine which dishes were suitable and which contained wheat, and had been able to talk to the celiac diners without having to leave to consult Russell every two seconds. The entire ordering process took no less than twenty minutes. (Unacceptable in my book.) And even after all of that, they still were served a complimentary amuse bouche starter of favas and peas on top of a crostini... which, yes, contains wheat. Rather than make them a separate dish of just favas and peas--without bread--as would have been normal, the celiacs' dishes were whisked away and they didn't receive any amuse bouche. Which is slightly odd, given that this whole exercise was about pleasing the customer. Argh.

James and Alasdair. The guys offered guests a photography competition, in which they were giving away bottles of house wine to customers who correctly guessed the subject of some abstract photography, which was a huge hit. And complimentary glasses of wine to every table. And canapes. And petit fours. And lemon posset as a pre-dessert. Inspector David Moore found it incomprehensible that James and Alasdair would be giving away the delicious posset rather than charging for it, while the petit fours were basically inedible and should have been thrown away. They got reamed by Raymond and the inspectors, however, for giving away too much: offering wine on the house cannibalized their sales of alcohol; offering free canapes cannibalized sales of starters.

They also had to contend with a group of supper club fine diners who criticized James' cooking in terms of taste and presentation, which they found disappointing overall. A real shock, which is surprising, given that The Gallery's typical complaints don't involve the food whereas Alasdair usally gets slated. In this case, it was Alasdair getting the praise for a change.

The boys meanwhile also had a celiac diner, a seven-year-old girl, whom James went out of his way to make sure did NOT receive any gluten... but, still, a dessert containing crushed biscuits on top still went out of the kitchen and over to the table. Was it James' fault? Not really, though he should have double-checked that ticket before it went out of the kitchen and Alasdair should have especially made sure that she wasn't getting ANY gluten and briefed the waiters accordingly. Overall, they did pretty well though I am surprised once more about James' cooking coming under fire. Hmmm.

What did you think of this week's episode? Would you have put all three couples into the challenge next week? Who do you think will win this competition? And whose dreams are likely to be dashed on the rocks? Discuss.

Next week on Last Restaurant Standing ("Masterclass"), the three remaining couples are put through front-of-house boot camp under the strict tutelage of perfectionist restaurateur David Moore while the chefs must prepare dishes to Raymond Blanc's satisfaction in the kitchens of Le Manoir aux'Quat Saisons.

Danielle C.F. Maris said…
I really like Lindsie and Tim but expect more from them at this point. Especially Tim. I was absolutely horrified by what he sent out to that vegetarian/vegan table. Sauteed cabbage as a main course? No way. He definitely should have been more prepared.
4/15/2009