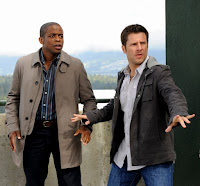 USA has renewed dramedy Psych for a fifth season, set air in summer 2010. The series, which is set to become USA's longest running original drama series in production, will air the second half of its fourth season beginning in January. (Variety)

Entertainment Weekly's Michael Ausiello is reporting that ABC has temporarily halted production on drama series FlashForward, which again hit a new series low last week and has seen some behind-the-scenes drama with the departure of showrunner Marc Guggenheim. The production shutdown will last six days. "They started production early so that they could have the luxury to do this," an ABC spokesperson tells Ausiello. "They want to maintain the high quality of the show, and this gives the writers the opportunity to do so." (Entertainment Weekly's Ausiello Files)

James Remar (Dexter) has been cast in a recurring role on the CW's supernatural drama Vampire Diaries, where he will play Stefan and Damon's father, described as "an aristocrat from the Civil War era." He's currently slated to appear in at least one episode. (E! Online's Watch with Kristin)

TVGuide.com's Natalie Abrams has an interview with V star Laura Vandervoort, who plays the blond Visitor named Lisa. Vandervoort says that she doesn't want Lisa and Logan Huffman's Tyler to have an alien-human baby, however. "No. Even though I'd love to eat anything I want and have a belly for a season, I don't want them to head in that direction just because their relationship is really pure and innocent," she told Abrams. "I think if that did happen, it would be because Anna had told her to do that, to make that mixed race. I kind of want things to go slow for them, and I want it to be a Romeo & Juliet situation in that they have to be together, but they can't. Erica [Elizabeth Mitchell] is an FBI agent and my mother is the leader of the Visitors. That's two different families being torn apart." (TVGuide.com)

Cougar Town is set to resume production next week following the unexpected production shutdown (due to Courteney Cox's recent undisclosed family issue) and a planned hiatus this week. (E! Online's Watch with Kristin)

FX has signed a deal with Summit Entertainment for the basic cable rights to the Twilight franchise feature films beginning with Twilight in late 2011 and New Moon a year later. Deal also gives the cabler the rights to air The Hurt Locker, Knowing, and Push. (Variety)

TV Guide Network will air the FremantleMedia-produced special I Dreamed a Dream: The Susan Boyle Story on December 13th, the same day that it will air in the UK on ITV1. (Hollywood Reporter)

TruTV has ordered a second season of docuseries All Worked Up, with thirteen new episodes on tap for the spring. Series, from RDF USA, had launched with six episodes on October 19th. (Hollywood Reporter)

Endemol has acquired three British production companies from IMG Worlwide, securing a deal worth approximately $50 million for Tiger Aspect, Darlow Smithson, and Tigress. Despite the change in hands, all three companies will "retain creative freedom" under Endemol UK. (Hollywood Reporter)

Grant said…
"They started production early so that they could have the luxury to do this," an ABC spokesperson tells Ausiello.