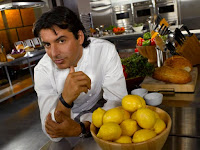 I'm not quite sure what to make of Bravo's newest culinary competition series Chef Academy, which launches tonight.

I'm a huge foodie and Top Chef might just be one of my life's main obsessions but I couldn't work up any appetite for the soggy and tasteless Chef Academy, which plays as a budget chain knock-off of the glossy and well-edited Top Chef.

Chef Academy revolves around hotheaded French chef Jean Christophe Novelli, a Columbo-obsessed Michelin star winner who moves to Los Angeles with his pregnant fiancee to open up a West Coast outpost of his celebrated London-based Novelli Academy Cookery School. I could have perhaps gotten behind a docudrama that focuses on Novelli's efforts to get his Venice, California cooking academy off the ground but that's not the route that Chef Academy's producers go, instead transforming it into a reality competition series as Novelli selects nine students for his academy and attempts to transform them into chefs.

And that's where things get truly unappetizing. I'm a little confused why Bravo would themselves attempt to duplicate the success of Top Chef with a lesser version of what is essentially the same series but with the sort of pretense and irritating charmlessness of FOX's Hell's Kitchen. Here, Novelli does his best Gordon Ramsay impersonation, attempting to goad the contestants into screwing up, throwing bowls on the floor, and just basically showing that all television chefs have to be arrogant and pompous bullies to get on camera.

Which would be bad enough if the series itself didn't seem so predictably staged. A full ten minutes of auditions for the aspiring chef academy participants could have been interesting if it hadn't been so blatantly obvious in every respect which of the aspiring chefs would make it through to the series itself. And I posit that the producers may have even gone so far as to stack the deck by roping in some stringers to "audition" for Novelli's omelet-making challenge. Yes, there are a few people appearing on camera that I have to wonder about.

But that's a quibble in the face of the opening episode's major and glaring missteps. For one, the pacing is plodding. Later on, Novelli challenges the nine contestants to prepare their signature dish but rather than have all of them bustling about the kitchen at the same time, the producers instead have each one prepare their dish separately, one after each other, and then serve the finished plate to Novelli. The result is a plodding sequence that seemed interminable and lacked any sense of energy, pacing, or tension.

Additionally, the aim of the academy--and the series by extension--is wholly unclear. Some of the participants have professional culinary backgrounds while others can't seem to cook very well at all. I'm not sure what was accomplished by making the playing field so wildly uneven. Was the point to further the careers of the pros (as Top Chef does) or to take untrained civilians and transform them into accomplished chefs? The latter would have been rather interesting to see and would speak a good deal about just what Novelli Academy Cooking School is able to accomplish.

But by having the contestants' culinary abilities vary so wildly, it dilutes any clear-cut tension in the competition. Top Chef succeeds because--in theory, anyway--each of the participants are professionals who know what they're doing. I'm not sure what's gained by having a housewife compete against a classically trained chef. It's odd and it's offputting to say the least. Either the participants should be total novices or they shouldn't. But to mix them up with pros seems foolhardy on the part of the producers.

Additionally, the entire elimination process is wonky. Rather than getting sent home for a terrible dish, each of the students has to fail three of Novelli's tests before they get cut from the competition and sent home. Um, what? Again, there's a lack of thought about tension, pacing, or drama... which seems to infect the entire series as a whole. It's lacking heat and flavor, despite Novelli's attempts to upstage the students with some overly dramatic tantrums and bowl-flinging.

Having tasted the first episode of Chef Academy, I can say that I won't be coming back for seconds. This is one dish I'll gladly send back to the kitchen.

That's one sentence I never thought I'd read!

Even the previews for this show make me cringe. Top Chef is a reality show but it has class, something that Chef Academy is obviously lacking.
11/16/2009

Unknown said…
I watched Chef Academy last night and felt that it wasn't as bad as reviewed. I enjoyed a "New" taste of cooking aside from the well known "Top Chef". Bravo wanted to try something new and succeeded in doing so. Though it might not pull ratings like Hells Kitchen or Top Chef, I believe it will hold its own. Give it a chance!
11/17/2009

Shane K. said…
I've truly enjoyed it. I think it's down-home feeling and amateur slant is its charm. Although I enjoy Top Chefs, TC can be a tad haughty and obnoxious, while Chef Academy is down to earth and refreshing. I'm a fan.
12/02/2009