It Takes A Village: An Advance Review of AMC's "The Prisoner" 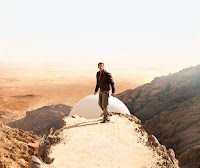 The Prisoner, which ran for just 17 episodes in the late 1960s, has remained an enduring example of how original and groundbreaking the medium of television can be, giving the world a surreal and often nightmarish exploration of the battle between the free will of the individual and the oppression of a tyrannical regime.

It was a bit of a gambit then that AMC, in concert with UK terrestrial network ITV, would seek to remake the Cold War-tinged The Prisoner for a contemporary audience. This Sunday, AMC will launch the first two hours of its miniseries version of The Prisoner (subsequent installments air on Monday and Tuesday), written by Bill Gallagher (Conviction) and directed by Nick Hurran (Bonekickers).

Jim Caviezel (Passion of the Christ) plays Six, a man who discovers that he is in The Village, an all-encompassing world within the desert where nothing is as it seems. His appearance there is a mystery as is Six's own past; it appears that he works for a shadowy corporation whose specialty is surveillance from which he has rather unexpectedly resigned. (He does so in the opening credits with a flourish of a spray paint can.) Finding himself a prisoner of a world he doesn't understand, he attempts to return to New York but The Village's shifty inhabitants claim that there is no such place as New York. The Village is all that there is and Six can either conform or he can die.

Six quickly finds an adversary in the Village's diabolical overseer, Number Two (Lord of the Rings' Sir Ian McKellen), and The Prisoner works most effectively when it is viewed as a series of climactic and tension-laden showdowns between Six and Two, a Machiavellian dictator whose tools of oppression range from manipulation to torture. But Two is more than mere mustache-twirling silent film villain and McKellen imbues him with a compelling cocktail of horror and humanity. Whereas the classic Prisoner's Two served as the (quite literally) ever-changing face of a tyrannical bureaucracy, the miniseries broadens Two's backstory to include a teenage son 11-12 (Sweeney Todd's Jamie Campbell Bower) and a comatose wife M2 (Rachael Blake) and surrounds Two in an aura of perpetual mystery.

The rest of the cast includes Lennie James (Jericho) as cabbie/family man 147 who quickly befriends Six, Ruth Wilson (Jane Eyre) as doctor and love interest 313, and Hayley Atwell (Brideshead Revisited) as the enigmatic Lucy, as well as a series of changing Village players, each of whom seems to have their own agenda for wanting to either ensnare or free Six. (And, yes, it gets much easier as you go along to keep track of all of the numbers.)

The Prisoner offers an incisive look at a society in which fear and paranoia have corrupted everyone's outlook; children are taught advanced surveillance techniques; cameras are secreted into every nook and cranny, and everyone is either being watched or doing the watching. It's clearly intended to pick up on our own post-9/11 fears of terrorism and suspicions of just what our neighbors are up to next door. But there's also a distinct lack of danger for Six there for some reason. Even as the plot moves between The Village and Six in New York, I never got the sense that his life was really remotely in jeopardy, which is a real problem for a thriller that's meant to thrive on tension and peril.

It's McKellen who elevates The Prisoner, though his presence quickly overshadows that of Caviezel's Six, even as the plot goes off the rails after the first few promising installments. While the reimagined Prisoner is visually dazzling (with a few sequences that managed to knock my socks off), the overall sensation is one of style over substance in the end. While there are some novel twists as well as some tongue-in-cheek shoutouts to the original series here (along with some unexpected humor), The Prisoner doesn't quite work in the end. It's a dizzying mix of metaphors and messages that become increasingly muddled as the six-hour miniseries wears on.

While the original Prisoner ended on a rather ambiguous note, the reinvented Prisoner does provide concrete answers in the end, solving several mysteries that comprise the series' central mythology. But my main issue is that the series itself is at times so focused on the ego of the individual and on our society's over-indulgent love of the self that the battle between Six and Two never gels into anything resembling a universal struggle.

There are some nice moments, some tense showdowns, but there's also a hell of a lot of narrative and thematic messiness going on here, particularly as the plot wears on over the final two hours. While the original Prisoner has managed to withstand the test of time and remain a true television classic in every sense of the word, I don't believe that this reimagining will manage to pull off the same feat. Ultimately, by the time you reach the plodding final hour, this might be one miniseries that you--like Six himself--are looking to escape at all costs.

The Prisoner begins Sunday evening at 8 pm ET/PT on AMC.

Franka said…
I was kind of excited about this but I've yet to hear a good review. Sounds like it's pretty muddled. I might tune in to the first episode, though, just to see McKellen as Two.
11/13/2009

Anonymous said…
Well, at the very least, it will introduce a new generation to the genius of the original 'The Prisoner' of the 1960s. That was such an extraordinary show that my expectations are not too high for this re-make.
--Joan
11/13/2009

That was never really the case in the original series either. Number Six is to valuable to kill: what they want is what's in his head. It's his mind, not his life, that's in jeopardy: will the Village break him?

Reserving judgment on the remake, except to note that the original sets an impossibly high bar for it to clear.
11/13/2009