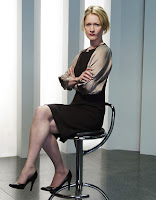 The Chicago Tribune's Maureen Ryan is reporting that Paula Malcomson (Caprica) has been cast in an eight-episode story arc on Season Three of FX's Sons of Anarchy, where she will play a character named Maureen. Sons of Anarchy is expected to return to FX's lineup in September, with production slated to begin in roughly three weeks' time. (Chicago Tribune's The Watcher)

SPOILER! Entertainment Weekly's Michael Ausiello is reporting that Seth Gabel (Dirty Sexy Money) has joined the cast of FOX's Fringe. Gabel will play the lead Fringe Division investigator in the alternate universe and is slated to make his first appearance during the season's two-part finale, airing May 13th and 20th, and could, according to Ausiello, also recur next season. (Entertainment Weekly's Ausiello Files)

The second half of Maureen Ryan's mammoth interview with Chuck co-creator Chris Fedak is now live at The Chicago Tribune. In this section, they talk about the plot twists from last night's episode--originally planned as the season finale--and what else is coming up on the next six episodes. "We looked at the 13 episodes as going from the low point of Chuck and Sarah’s relationship – that his decision to be a spy [potentially would] fundamentally change who she thinks he is, [going] to the point in Episode 13 that Chuck, even though now he is a spy and now a hero and can do amazing things, he’s still the same guy," Fedak told Ryan. "At the core of Chuck, he is still the guy that she originally fell in love with." (Chicago Tribune's The Watcher)

Lucasfilm is developing another Star Wars series but--shocker!--this time it's as an animated comedy. No network is currently attached to the project, nor is there an episodic count yet. Project will be written by Brendan Hay, with Seth Green and Matthew Senriech--of Robot Chicken fame--serving as consultants on the project, which will be directed by Todd Grimes and produced by Jennifer Hill and which will "look at the saga's characters with a playful and irreverent tone." (Variety)

Sharon Lawrence (Curb Your Enthusiasm) has been cast in Josh Schwartz and Matt Miller's CBS comedy pilot Hitched, where she will play the prim and nosy mother of Kristin Kreuk's Rachel, who has recently gotten married. (Hollywood Reporter)

FOX has pulled comedy Sons of Tucson from its schedule, effective immediately, and will burn off remaining episodes of the low-rated series this summer beginning June 6th. Network will fill the Sundays at 9:30 pm ET/PT slot with American Dad. Additionally, FOX confirmed that the series finale of 'Til Death will air on Sunday, June 20th. (Variety)

ABC has given a series order to game show Downfall, from FremantleMedia North America, in which contestants must answer trivia questions while perched on the top of a skyscraper, from which their winnings could be thrown off of if they lose. Project, which has been received an unknown episode commitment, will be executive produced by Scott St. John. (Hollywood Reporter)

Southland producers are still in the dark about the fate of the TNT cop drama series. "The actors are on hold and there's a cutoff date in June by which they have to be notified," producer Christopher Chulack told Variety. "We're hoping for a decision in mid-to-late April." [Editor: fingers crossed.] (Variety)

NBC has ordered second seasons of its three newest reality series offerings, The Marriage Ref, Minute to Win It, and Who Do You Think You Are, all of which will return at some point during the 2010-11 season with Ref getting a 13-episode pickup while the latter two have been renewed for ten episodes apiece. (Variety)

Elsewhere, the Peacock has cut back on its commitment to freshman medical drama Trauma, which will now only produce 18 installments this season rather than the previously announced 20 episodes. Trauma will wrap its season on Monday, April 16th as a result. (Futon Critic)

TVGuide.com's Natalie Abrams talks to V stars Scott Wolf and Laura Vandervoort about what's coming up on the ABC sci-fi series, which returned last week with the first of eight episodes. "We start to see a Chad Dekker who has his better senses telling him that it's time to start paying attention to what might really be going on," Wolf said about his character, Chad Decker. "Once his skepticism and fear take hold, he has to figure out where to go because he can't just run away from the Visitors, but he also can't keep running in the dark. He is really playing both sides, waiting to see who's going to win." (TVGuide.com)

ABC is looking to lend a hand to its Friday night reality series Jamie Oliver's Food Revolution by pulling this week's planned episode of Wife Swap and instead airing a repeat of last week's Revolution in the 8 pm hour, according to The Wrap's Josef Adalian. (The Wrap's TVMoJoe)

TV Guide Magazine's Will Keck talks to Desperate Housewives creator/executive producer Marc Cherry about the identity of the Fairview Strangler, offering up six possible suspects in the ongoing murder plot, which will be resolved on April 18th. (TV Guide Magazine)

More drama on Wisteria Lane. Former Desperate Housewives star Nicollette Sheridan has sued executive producer Marc Cherry, ABC, ABC Studios, and Touchstone Television for $20 million, claiming that she had been physically assaulted by Cherry on the set of Housewives and, when she complained, was fired. "While we have yet to see the actual complaint," said ABC Studios in a statement, "we investigated similar claims made by Ms. Sheridan last year and found them to be without merit." (Hollywood Reporter's THR, Esq.)

ABC has pushed back the launch of its romantic comedy Romantically Challenged--starring Alyssa Milano--by a week, to Monday, April 19th. (Futon Critic)

Gillian Zinser (90210) will star in MTV original telepic The Truth Below, which recounts "teen angst and betrayal on a disastrous ski vacation" that leaves four friends trapped under an avalanche. Project, shooting this week in Calgary, is written by Wendy Diane Miller and directed by Scott Glosserman. (Variety)

TV Guide Magazine's Will Keck is reporting that Hugh Laurie's Gregory House and Olivia Wilde's Thirteen will find themselves at a Renaissance Fair on the April 19th episode of House. "[Thirteen] is always tough and not particularly girly, but in this episode she shows she likes to have fun and play dress-up," Wilde told Keck. "The Renaissance had their hierarchy, and I’m not very high up. I think I’m a wench!" (TV Guide Magazine)

Anonymous said…
Does the Paula Malcolmsen note (first paragraph) mean that she is gone from Caprica? She really is a weak link on the show...
4/06/2010

Anonymous said…
That ABC game show "Downfall" could cause a few problems.

Given the way the way people run into the street when a bag of money falls off an armored car, we could be looking at traffic jams and accidents around the skyscraper.
4/06/2010