Backstabbing and Brunoise: An Advance Review of Top Chef D.C. 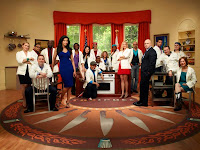 Before we can even catch our collective breath after the end of Top Chef Masters, Bravo has brought back the original Top Chef to the lineup, beginning with tonight's season premiere ("What's Your Constituency?").

While I've loved seeing master chefs hone their craft even further on Top Chef Masters, I have to say that I'm really excited by the return of Top Chef itself. There's an even fiercer air of competition from these chefs, many of whom are just beginning their culinary careers... and are therefore less likely to play nice and be as helpful as the masters. Which means more drama, inevitably.

Heading to Washington D.C., this season of Top Chef finds the seventeen new contestants attempting to outdo their competitors in the nation's capital, which means that the setting is only too apt for the backstabbing and manipulation likely to unfold as this season's episodes get underway. In the first installment alone, we're treated to one of the most hyper-ambitious contestants that the entire series has yet produced. (That would be Angelo Sosa, of course.)

Tonight's episode finds the chefs competing in a round robin Quickfire Challenge with an emphasis on prep work and mis-en-place before the four last chefs standing get an opportunity to use the ingredients to dazzle the judges, which this time around includes the silver-haired Frenchman Eric Ripert, thankfully replacing former judge Toby Young. (I'm hungrily anticipating Ripert's criticisms and think he'll be more honest than pithy, whereas Young seemed more determined to drop some bon mots than offer some real culinary critiques.)

The judges on the whole seem more unified this season; there's something intoxicating about seeing Ripert at the judges table alongside such icons as Gail Simmons and Tom Colicchio and knowing that he'll be sticking around all season long. He adds a certain gravitas and knowledge that Young lacked in abundance.

Likewise, the contestants seem eager and hungry, in the best possible sense of the word. Through the opening Quickfire, some rather fierce contenders emerge for the throne, including the aforementioned Angelo and Kenny Gilbert, both of whom manage to turn out incredibly polished dishes in a severe time crunch. Keep your eyes on these two as they are likely to go very far indeed during the competition.

But there are also some duds among the group, which becomes crystal clear during the first Elimination Challenge, in which the chefs are tasked with creating dishes that reflect where they came from, in essence, a symbolic display of their own constituencies, which makes sense with the nation's political leaders gathering in Washington from their own enclaves.

There are quite a few missteps here, including one contestant who opts to make a fat-free rendition of chicken liver terrine... which is traditionally made with fat, as that's what makes it a terrine or mousse in the first place. And then there's John Somerville, with his huge dreadlocks and off-putting manner and a dish called O-High-O that's, well, impossible to describe if you haven't seen it. There's a lot of chaff to be cut from the wheat if these chefs don't step up to the plate.

Which is fine and good, in theory. Last season, it was too obvious that the Voltaggio Brothers were two of the strongest contenders (while this year we might call it for Angelo and Kenny), but I want to be surprised. I'm hoping that nerves played a huge role in some of the missteps witnessed here and that there might still be some dark horse players emerge over the next few weeks.

My only complaint, in fact, is that the so-called "High Stakes" Quickfire is in effect again this season. This gimmick worked during the Las Vegas season but it's more than a little head-scratching here. Just what does the term "high stakes" have to do with Washington, D.C.? I'd at least have hoped that the producers would have found something more apt for the political scene. (Any suggestions?)

All in all, tonight's season premiere is a nice taste of the nation and the perfect beginning for another cutthroat edition of Top Chef. Just make sure you've eaten beforehand.