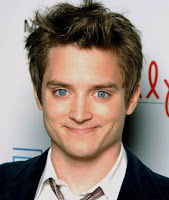 Elijah Wood (Lord of the Rings) will star opposite Jason Gann in the pilot for FX's US adaptation of Aussie comedy Wilfred, about a man and his talking dog, the latter of which will be voiced by Gann, the original creator of the series. Project hails from writer David Zuckerman (Family Guy) and director Randall Einhorn (The Office). Production is slated to begin this summer. (Hollywood Reporter's The Live Feed)

Larry King will be hanging up his trademark suspenders this fall after 25 years as the host of Larry King Live in order to spend more time with his family. The Los Angeles Times' Matea Gold and Yvonne Villarreal have a fantastic interview with King about his decision to leave CNN. "I said, 'I can't top this,'" King told the Times on Tuesday. "I'm not getting younger. I want more time with other things. It's time to go... The daily grind is tough. And there are aspects of it, you know, when you've got to do tabloid shows, which is the nature of the business, you've got to do the girl that's missing in Aruba. It's hard to make the case that that is major news, but that's what news is today. And my curiosity runs to that, but not nightly." (Los Angeles Times)

Fancast's Matt Mitovich is reporting that Nestor Carbonell (Lost) will join the cast of USA's Psych for a multiple-episode story arc, where he will play Declan Rand, described as "a criminal profiler who over the course of two episodes will shape up to be Shawn’s professional – as well as romantic – rival." Season Five of Psych will launch July 14th on USA. (Fancast)

SPOILER! Doctor Who showrunner/head writer Steven Moffat has teased details about next season of the sci-fi drama, which stars Matt Smith and Karen Gillan. The secret behind just what that voice meant by "silence will fall" will be explored in the new season of Doctor Who, which will air in 2011 (after a Christmas Special, confirmed last weekend by BBC). "What is that, who is that, who are the silence, what's coming? The whole point of the silence is next series," Moffat told Doctor Who Confidential "Also, River Song... who is she really? That's what we're going to find out next year." (Digital Spy)

TVGuide.com's Adam Bryant has some details about the new season of AMC's Mad Men via an exclusive video that goes behind the scenes of the new promos to tease some precious morsels about what to expect during Season Four of the period drama. "I wanted to have a continuity of these characters and things that are happening to them ... and don't pretend like that they didn't happen," creator/executive producer Matthew Weiner said. "At the same time, be prepared for the fact that [for] a lot of the things that happened, you're going to have to watch and see how they worked out." (TVGuide.com)

Emily VanCamp has confirmed her departure from ABC's Brothers & Sisters via an exclusive interview with Entertainment Weekly's Michael Ausiello. "It is true. I’m going to go back for a couple of episodes, which I’m really excited about," VanCamp told Ausiello. "I really feel like Rebecca has run her course. And the deal I was offered this year was for two more years and I just felt like since renegotiations were happening that maybe it would be the right time to move on. I’ve been doing this for a very long time and other opportunities have presented themselves that I haven’t been able to do. I’ve had such an amazing four years on the show and I felt like maybe it was time. It was a big risk but I’m really excited about it." (Entertainment Weekly's Ausiello Files)

It's official: after weeks of negotiations, A&E has ordered thirteen episodes of drama Breakout Kings, which had been previously set up at FOX. Production will begin this fall on the episodic commitment and will air in 2011 on the cabler. "We are thrilled to collaborate with accomplished talents such as Matt and Nick, as well as Peter Chernin and Katherine Pope; with phenomenal track records of success," said Bob DeBitetto, President and General Manager of A&E and BIO Channel, in a statement. "As soon as we screened the Breakout Kings pilot, it struck us as the perfect fit for A&E as the network of 'Real Life. Drama.'" Series stars Laz Alonso, Domeick Lombardozzi, Malcolm Goodwin, Jimmi Simpson, and Brooke Nevin. (via press release)

SPOILER! Entertainment Weekly's Michael Ausiello is reporting that Mitch Pileggi will be returning for a multiple-episode story arc on the CW's Supernatural, where he will reprise his role as Sam and Dean's presumed dead grandfather. How is Gramps returning from the dead? “For one thing, he’s a Campbell — from Sam and Dean’s mom’s side of the family,which, unlike their dad’s, has actually been into hunting for a very long time,” executive producer Sera Gamble told Ausiello. "There’s a whole side of Sam and Dean’s history that they know nothing about. We’ll get to find out a bit about it this season." (Entertainment Weekly's Ausiello Files)

Deadline's Nellie Andreeva is reporting that Claire Forlani and Peter Mooney have been cast in Starz's upcoming medieval drama Camelot from writers Michael Hurst and Chris Chibnall. Forlani will play Queen Igraine, the mother of Arthur (Jamie Campbell Bower), while Mooney will play Kay, Arthur's brother. [Editor: you might recall that Forlani was previously attached to Showtime's upcoming comedy Episodes but was replaced by Tamsin Greig.] The rest of the cast includes Joseph Fiennes, Eva Green, and Tamsin Egerton; Camelot is slated to launch in early 2011. (Deadline)

SPOILER! TV Guide Magazine's Will Keck is reporting that a new baddie is headed to Mystic Falls on the CW's Vampire Diaries next season and talks to executive producer Julie Plec about this mysterious addition to the Lockwood clan. "Our big new addition is Mason Lockwood, the mayor's much younger and cooler brother, who has been estranged from the family," Plec told Keck. "His return introduces a lot of questions about what is so special about that creepy Lockwood family." (TV Guide Magazine)

Nickelodeon's Nicktoons has ordered 22 episodes of animated series Rush Zone: Guardians of the Core, which is based on NFL's website NFLRush Zone and which will feature the voices of NFL players and coaches in segments approximately two to five minutes in length. (Variety)

Oxygen has snagged the off-network cable rights to FOX's Glee while USA has done the same for ABC comedy Modern Family; both series will debut on their respective channels beginning in 2013. As part of the Glee deal, Oxygen will also air an unscripted reality series that will depict the search for a new cast member, a series that was originally intended to air on FOX before the network scrapped it. According to Variety's Michael Schneider, "Oxygen is expected to produce the "Glee" reality show, with reality producers experienced in reality competitions likely to be hired." (Variety)

Is it common to sell syndication rights for first-season shows? That seems like a big commitment. Of course these shows are great, so no one would consider not picking them up for more seasons.
6/30/2010

It is a very big commitment for a cabler to make, particularly in today's environment. However, the deals have something going for them. Both series have seemed to strike a chord with viewers and have been successful not just in the US but also in the international marketplace. Additionally, Glee has already been renewed for a second and THIRD season, meaning that it's already been renewed through the 2011-12 season, which means that when Oxygen's window begins in 2013, they'll have access to those three seasons already.

It's unlikely that either of these series will be going anywhere any time soon, so it's actually quite a canny deal to be making right now.

Having said that, there are no real certainties in the television business anymore and, looking at how quickly some series (like Heroes) can fall from public adoration means that longevity isn't ever a guarantee anymore.
6/30/2010