AMC today released the first photo of Andrew Lincoln as Rick Grimes from the set of the cabler's upcoming supernatural drama The Walking Dead, set to premiere this October.

Robert Kirkman, creator/writer of the comic and executive producer on the series says:
"Writing this book for the past seven years I've gotten very close to the character of Rick," said Robert Kirkman, who wrote the comic on which The Walking Dead is based, and who will serve as an executive producer on the AMC drama. "Andrew Lincoln embodies every aspect of the character that fans know and love. After seeing this photo I don't think that there will be a doubt in anyone's mind that he's perfect for the role."

A larger version of the photo can be found below. 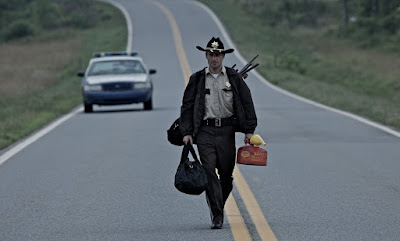 Here's how AMC is positioning the series: "The Walking Dead tells the story of the months and years that follow after a zombie apocalypse. It follows a group of survivors, led by police officer Rick Grimes, who travel in search of a safe and secure home. The comic goes on to explore the challenges of life in a world overrun by zombies who take a toll on the survivors, and sometimes the interpersonal conflicts present a greater danger to their continuing survival than the zombies that roam the country. Over time, the characters are changed by the constant exposure to death and some grow willing to do anything to survive."

The Walking Dead is expected to launch in October on AMC.