The Daily Beast: "Charlie Sheen: Stop Putting Him on TV!" 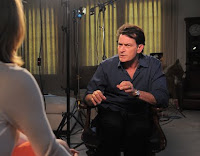 The Charlie Sheen media frenzy continues onwards, it seems, with no end in sight.

Over at The Daily Beast, you can read my latest feature, a strongly-worded essay entitled "Charlie Sheen: Stop Putting Him on TV!"

As the dek reads, "It’s not strange that people want to see Sheen’s crazed rants wherever they can... but it sure is disgusting that mainstream media outlets are giving him a platform."

What's your take on the media's role in this feeding frenzy? When it is time to say enough?

Debbie said…
Please stop giving him air time AND column space. When we no longer provide him any attention, that is when he will either get help (unlikely) or spin out of control. Truly he is the only person that can decide which way to go now, and feeding his ego - which is all that any of the media are doing - is not helping anyone.
3/02/2011

Remember the old Don Henley song ("can we film the operation, is the head dead yet?")?. This kind of trash is the lifeblood of the MSM. Without it, they'd have to resort to telling us what's really going on, and if they did that, people would just phone up and demand more Charlie Sheen.
3/02/2011