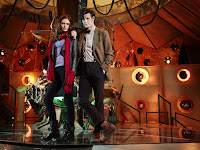 "This is how it ends... Pond flirting with herself."

While Doctor Who doesn't officially return until next month, BBC One has given us a little glimpse of the Doctor (Matt Smith), Amy Pond (Karen Gillan), and Rory (Arthur Darville) in Steven Moffat's Red Nose Day mini-episodes, "Space" and "Time," which can be viewed below.

Hoping to sneak a peek at Amy Pond flirting with herself, the TARDIS materializing inside itself, and a gag about a skirt, a driver's test, and a glass floor? You've come to the right place. Allon-y!

Season Six of Doctor Who begins with "The Impossible Astronaut" on April 23rd on BBC One and BBC America.