The Daily Beast: "Fringe Under Fire" (And 8 Burning Questions Answered!) 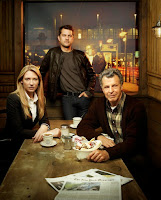 It's Friday, which means a brand-new episode of FOX's Fringe is heading to your screens tonight.

Over at The Daily Beast, you can read my latest feature, "Fringe Under Fire," in which I talk to executive producers Jeff Pinkner and Joel Wyman about Fringe, its renewal prospects, why science fiction dramas have proven tricky at the broadcast networks of late, lessons learned from Lost and Alias, and the show's innate philosophical leanings (something I've written a great deal about at this site).

Fringe did become much more interesting when its depths began to be revealed - both with characters and mythology, similar to Lost.

The other show I am thoroughly enjoying presently is Justified. The story telling and character development are captivating.
3/11/2011