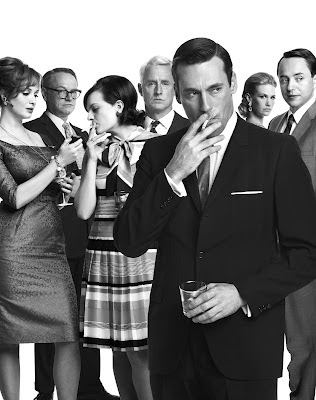 Troubled Don! Ascendant Peggy! Poor Lane! Following the finale of a controversial season of Mad Men on Sunday night, I examine the 13 most memorable moments from its fifth season.

At The Daily Beast, you can read my latest feature, "Mad Men Season Five's 13 Most Memorable Moments," in which I explore and analyze 13 of the fifth season's most memorable moments, including two from the season finale ("The Phantom").

Mad Men’s fifth season, which came to a close on Sunday, began with the joy and optimism felt by newlyweds Don Draper (Jon Hamm) and Megan (Jessica Paré), only to slowly let in a narrative darkness that manifested itself in squandered dreams, hopeless enterprises, larceny, and even the death of a major character. Husbands and wives warred, ex-spouses sniped, children grew into adults, and partners fell out.

This all played out against a backdrop of monumental social and political change during which Sterling Cooper Draper Pryce hired its first African-American employee and gained its first female partner, though in both cases, there was an element of subterfuge rather than of progress. A joke ad stating that SCDP is an “equal opportunity employer” forced the partners to hire a black woman to be Don’s new secretary; Joan Harris (Christina Hendricks) was made a partner, but only because she sold her body to land them the lucrative Jaguar account. There is a sense that these “advancements” only perpetuate the norms rather than shatter them.

But regardless of the reasons behind these developments, each represents change in its own way, and that is one of the many themes playing underneath the fifth season, including the ending of the mentor/protégé dynamic between Don and Peggy Olson (Elisabeth Moss), who quit the firm to make her own way in the world. With an end date in mind for Mad Men (only two more seasons!), creator Matthew Weiner has shifted the drama into its final act before viewers’ eyes.

The 13 scenes below capture some of the most surprising, exciting, thrilling, or heartbreaking moments of the fifth season of Mad Men. WARNING: Proceed with caution if you are not completely up-to-date with Mad Men, as specific plots and narrative twists are discussed at length.