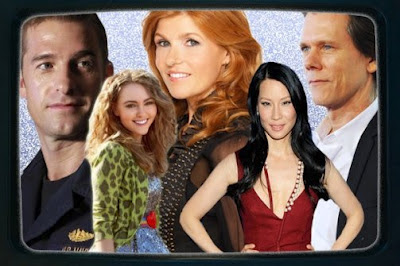 Will the 2012-13 television season be a success or a snooze? Over at The Daily Beast, Maria Elena Fernandez and I offer our first impressions of 30-plus network pilots—from The Following and Nashville to The Neighbors and Zero Hour (and everything in between)—coming to TV next season.

Head over to The Daily Beast to read my latest feature, "TV Preview: Snap Judgments of 2012-13’s New Shows," in which we offer our dueling he said/she said perspectives on all of the available broadcast network pilots.

While some of you may have jetted off on summer vacations in the last few weeks, we’ve spent the first part of the summer wading through pilots for more than 30 new scripted shows that likely will be on the air next TV season. (Sometimes networks change their minds, and, if we’re honest, there are a few shows we’d love to see disappear altogether.)

It was a Herculean feat to make it through the pile of screeners this year—it was not overall the best pilot season—to offer our first takes on the dramas and comedies that are headed to the fall and midseason schedules of ABC, CBS, Fox, NBC, and the CW.

Every year, the networks present their usual takes on the familiar doctor-lawyer-cop tropes, and this year is no exception. But there are also a few bright spots: a fading country music star (played by Friday Night Lights’ Connie Britton, y’all!), the crew of a nuclear sub gone rogue, a 1960s cattle rancher turned Vegas sheriff, a romantic comedy-obsessed ob-gyn, a serial killer inducting cult members via social networking, another modern-day Sherlock Holmes, and the beloved Carrie Bradshaw.

So what did we think? First, a few caveats: 1) The opinions below should be considered “first impressions” of the pilots that were made available by the broadcast networks and not reviews. 2) All pilots—from music and dialogue to casting, etc.—are subject to change, so what airs next season may, in fact, be drastically different than what was seen here. 3) We reserve the right to change our initial opinions upon seeing final review copies of these pilots—not to mention a few more episodes. 4) Not all of the midseason pilots were sent out by the networks; some, such as NBC’s Hannibal and Crossbones, to name two, haven’t even been shot yet; CBS again opted not to send out its midseason offerings; while Fox isn’t letting us see The Goodwin Games just yet.

Logline: A young couple moves from the Midwest and takes up residence as the live-in managers of a luxury Manhattan apartment building, where not everything is as it seems.
Cast: Terry O’Quinn, Vanessa Williams, Dave Annabel, Rachael Taylor
He Said: Eh. While the showrunners have source material to pull from (it’s based on a novel by Gabriella Pierce), I wasn’t all that thrilled by where the show is going. O’Quinn makes a better villain when he at least seems—on the surface—to be a good guy, but his Gavin Doran is written so overtly devilish that it doesn’t charm or intrigue. He’s Fantasy Island’s Mr. Rourke but with a short temper and a fondness for contracts. The supernatural elements don’t really scare, but I will say this: it did make me nervous to step on an elevator for a day or so… but didn’t make me want to watch another episode.
She Said: I really enjoyed all the spooky fun of this. It’s genius casting to pair Terry O’Quinn and Vanessa Williams as the married owners of a very mysterious fancy schmancy Manhattan building. So far, O’Quinn isn’t doing anything we didn’t see John Locke (Lost) do and Williams has brought her fabulous diva out for the third time, but they have a delicious spark. David Annabel and Rachael Taylor are also very believable as an in-love couple that moves in and are hired to manage the building. I wouldn’t move in to The Drake, but I’d visit.
Verdict: Sublet.