CBS Gets Its Own "Fugly" Betty, "Lovespring" Runs Dry for Lifetime 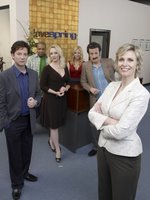 Well, maybe not. But CBS has just ordered a pilot of an old script called Fugly from Greg Garcia, creator of NBC's My Name is Earl. Said project was originally written by Garcia for Fox way back in the 2004-05 season as a potential star vehicle for Pamela Anderson (who had a talent deal at Fox during that time and ended up on comedy series Stacked instead).

The comedy will center on three rather ugly sisters in North Carolina who decide to pool their inheritance money to purchase an extreme makeover for one of the sisters (I assume that originally this would have been Pam Anderson's role). Afterwards, they move to Los Angeles with stars in their eyes, hoping to start a new life (and earn back that cash) from the beautiful sister's new looks.

Garcia will exec produce Fugly's pilot in March, after the second season of My Name is Earl wraps production, in association with 20th Century Fox Television. Unlike Earl, Fugly will be a multi-camera comedy, with some single-cam elements, rather like CBS' How I Met Your Mother (which, coincidentally is another 20th show on CBS).

In other news, Lifetime has ordered 13 episodes of drama Army Wives, starring Kim Delaney and Catherine Bell, about women living in a military base, with an eye towards a March premiere date.

Cabler also has pilots State of Mind (starring Lili Taylor and Lolita Davidovitch), Marisa Coughlin-led drama Side Order of Life, and legal drama Conspiracy under consideration for next year.

What's not under consideration at Lifetime are freshman series Lovespring International and Angela's Eyes, which the cable network has opted to not renew for second seasons. Both series debuted this summer.

According to Lifetime topper Susanne Daniels, the decision was motivated by the fact that Lovespring was difficult to promote as a cable on comedy (airing at 11 pm on Mondays with no series lead-in probably didn't help) and that Angela's Eyes would have required retooling.

Anonymous said…
Oh no! No more Lovespring! I will miss this quirky little show. It wasn't "Arrested Development" but it always proved to be entertaining.
12/01/2006