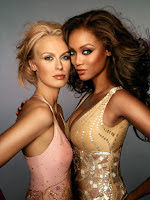 Wow, the very few of you who are actually watching the hysterical 30 Rock may have gotten that title but for the rest of you, looks like you'll have to download the episode from iTunes. Me, I'm pushing that catchphrase as hard as I can. It's simply too random not to catch on.

I couldn't let this week end without commenting about the season finale of America's Next Top Model and the crowning of leggy space cadet CariDee as the latest winner of the reality series. I would have been happy, going into the finale, with either CariDee or Melrose taking home the bragging rights to the Top Model title (not to mention the Seventeen mag cover, etc.), but secretly I really was rooting for CariDee to end up trumping Melrose in the end. Who, let's be honest, really did need getting knocked down a peg or two.

In looking at CariDee's photos, they were luminous and stunning and when she's made up in a fresh, natural look, she really does seem the epitome of Seventeen mag. Even Atoosa Rubenstein thought so. (Too bad the editor-in-chief "left to pursue other opportunities" following that Paris Hilton cover.) Some standouts from CariDee's portfolio: the Cover Girl shot (which looked gorgeous and perfectly captured the brief), the water nymphs shot (where she looked staggeringly flawless despite suffering hypothermia), that Barcelona bull-fighting pic. Hell, even the romance novel cover, circus elephant woman, and Angelina Jolie/Brad Pitt concept shoot were executed perfectly. That bull-fighting pic shows such awe-inspiring beauty and editorial styling that it could have lept off of the pages of Vogue. (Bravo too to photographer Nigel Barker for capturing the phenomenal shot as well.)

While the bridal runway show was a complete disaster (tone it WAY down, CariDee), I thought that Melrose did work the catwalk (or darkened, ghost-infested Spanish tunnel) with diva-like aplomb. (And didn't start shrieking and tearing up clothes like CariDee.) But looking at her photos side-by-side with CariDee's, Melrose does have this hard quality that doesn't always photograph as well as the softness of CariDee. The Cover Girl shot, along with the bullfighting pic, were perfect examples of this contrast between them. Melrose is such an innate perfectionist that she seems to be thinking and concentrating too hard during the photo shoots. And that reads on her face. Plus, Melrose does photograph older, not exactly a plus in a competition (and industry) where youth is le mot juste. Even just watching Melrose and CariDee walk into the final judging, CariDee just LOOKED the part of a model in her stance, appearance, and attitude. Melrose, on the other hand, looked like just another girl trying too hard to be noticed. 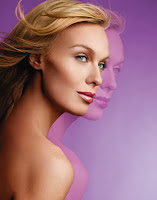 I was surprised at how well CariDee did with the Cover Girl commercial shoot, given the truly awful performance she gave in the Catalan version, which was mind-blowingly bad. This time around, she seemed so much more at ease with herself, especially after she warmed up in true CariDee fashion, letting herself be silly and just, well, bounce off the walls.

She nailed it this time around and, looking at that dazzling photograph of her with Tyra, CariDee not only looks the part of a top model but radiates its very essence from within. This girl is one to watch.

Anonymous said…
Melrose definitely did better in the fashion show but looking back over each of the blonde's work it was CariDee who definitely made the grade. Her silliness might get her into trouble at times but it's also a part of her charm. And I think she's learned some good lessons from the show that will help her act more professionally.