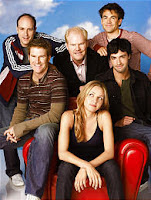 Looks like PJ will be hanging with her boys for some time to come.

Series, from Sony Pictures Television and creator Betsy Thomas, will resume production after the New Year and the newly ordered episodes will air sometime during summer 2007.

The back nine order bumps My Boys' episode count to 22 episodes.

News comes as the original 13-episode order for My Boys wraps next week, with TBS scheduling no less than five original episodes just after Christmas Day. The series' ninth and tenth episodes will air back-to-back on Tuesday, December 26th at 10 pm ET/PT, with episodes 11 and 12 popping up on December 27th from 10-11 pm ET/PT, and the final episode will air the following night (that would be December 28th) at 10 pm.

For the uninitiated, My Boys follows the travails on tomboy PJ Franklin (Jordana Spiro), a sportswriter looking for romance, but she discovers that just being one of the guys has its downfalls: namely preventing her from achieving an actual love life. Series costars Jim Gaffigan (Ed) as PJ's married brother, Kyle Howard (Related, Grosse Point) as the object of PJ's affections, Reid Scott (American Dreams) as her best friend, Kellee Stewart (Guess Who?) as her only female friend, and Michael Bunin (Scrubs) and Jamie Kaler (The Family Stone).

Anonymous said…
hurray! this show cracks me up. i love the little references to chicago neighborhoods (even though it's shot in l.a.) and jim gaffigan is great.
12/20/2006