That's What She Said: Dwight Thinks Long and Hard About Leaving "The Office" 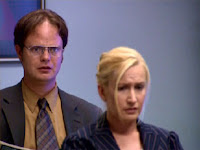 Okay, I wasn't going to write about The Office today but I came home last night after a work-related dinner much, much later than normally and all I wanted to do was crash on my couch and catch up with the gang at Dunder-Mifflin. I wasn't quite sure how last night's episode would play out as Office episodes that take place outside the, er, office tend to be either hilarious ("Booze Cruise") or painful ("Initiation").

Fortunately for me, finally home after a few cocktails and way too much Domaine Drouhin Pinot Noir, last night's episode of The Office ("Traveling Salesman") quickly became one of my favorites of the season so far.

While it's only Part One of a two-parter (catch next week's episode "The Return" to find out what happens), this episode could have buckled under its own weight, giving the audience several subplots to follow, multiple locations, and pairs of Dunder-Mifflinites to keep track of. But it worked brilliantly, showcasing each of The Office's talented actors in a unique and unexpected way. (And, no, don't worry: Rainn Wilson isn't going anywhere.)

How hysterical was happy, upbeat Angela? She awkwardly asks Pam to join her for coffee and then recounts a story about how her friend Noelle (how fitting) had a wonderful man in her life (named, er, Kurt) who saved her from a work-related catastrophe. But when everything seems peachy between Pam and Angela, she finally gets to the counter to order and issues a sharp "Hello?!?" Perfect. 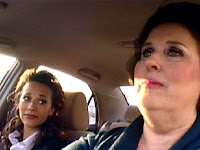 I LOVED the scenes with Phyllis (always a favorite) and Karen, particularly the reveal of these two ladies all made up for their sales call. Karen, of course, is furious that Phyllis would make her look like a Jersey hooker, but it all pays off once she gets a peek at a photo of their client's wife. Score one for Phyllis; who knew she could be so smooth? I adored the way that she turned her eyes towards the camera after the reveal, it was so knowingly cheeky. But poor Karen is surprised to learn that both Jim and Pam have managed to conceal from her that little "crush" that went down last season. The look on her face was so sad and so wounded that I can't help but root for Karen to win Jim's heart.

I'm afraid there's always going to be a rather large place in there for Pam and that Jim would break Karen's heart in a second if he honestly thought he had a chance with Pam, but for the meantime, I'd really like to see Jim happy for once. And finally getting more action than a hug from Dwight.

That hug between office frenemies Dwight and Jim was perhaps one of the most awe-inspiring and touching moments this season. And even jaded, cynical Jim was affected by it, even if it did seem completely out of the blue. Speaking of Dwight, despite his attempt at a coup to dethrone Michael earlier this season and seize command of Dunder-Mifflin Scranton (aided and abetted by a behind-the-scenes Lady Macbeth in secret lover Angela), the president of Beeswax None of Yours, Inc. proved himself to be a honorable and decent guy last night, refusing to reveal just what he was doing in Manhattan that morning (namely, saving Angela's bacon by turning in some paperwork she nearly missed the deadline on).

Thanks to the devious manipulations of the truly evil (and nauseatingly sycophantic) Andy Bernard, Dwight found himself between a rock and a hard place (that's what-- oh nevermind); he could prove that he wasn't after Michael's job but he'd have to disclose his and Angela's business and reveal themselves as a couple. Clandestinely meeting up in the break room as movie spies might, they have a furtive conversation about the consequences of their actions. Couldn't they just let everyone know, like Ryan and Kelly? Angela's classic response: "Those are the two people I hate most in the world." Ah, plus ce change...

What else did I love? Jim hanging up on Kelly as she began to babble on during his sales call; Dwight rocking out in the car as Jim looks on sheepishly; Michael emerging from a women's roadside restroom (the men's room was disgusting); the most mismatched sales duo ever in Stanley and Ryan; and the manipulative machinations of one Andy Bernard.

Andy might just be the most loathsome Office character ever created and the ease with which he influenced Michael was terrifying. (How great was his "mis-telling" of the betrayal and laundry story?) But something tells me that Mr. Bernard is in for some serious comeuppance, courtesy of the future-future Mrs. Dwight Schrute.

Or is that just some wishful thinking on my part?

Next week on The Office ("The Return"), our prodigal employee Oscar returns to Dunder-Mifflin after his vacation (courtesy of the events of "Gay Witch Hunt"), while Dwight adjusts to his new circumstances. Just where is and what is he doing? Tune in to find out.

It's the US premiere of the second season of Britcom Hardware, starring Martin Freeman of the original UK version of The Office, taking place at a small (you guessed it!) hardware store. On tonight's episode ("Bastard"), the guys notice that Kenny's son doesn't actually bare any resemblance to him whatoever, leading Kenny to get a DNA test done.

It's the second season premiere of one of the wackiest Britcoms ever devised. On the first episode ("Back"), Daisy returns from her travels to discover that Mike has moved into her room in the flat and if she wasn't put out enough, learns that a sinister government agency is after her.

Danielle C.F. Maris said…
cLoved last night's episode! It was fun to see characters pair up who don't normally interact (like Stanley and Ryan) and Dwight and Jim were particularly funny on their sales call. And I actually felt bad for Dwight when he quit! Dunder-Mifflin just wouldn't be the same without him.
1/12/2007

The Jay said…
Phrases like "Beeswax None of Yours, Inc." are what keep me coming back to Televisonary. Very funny stuff, that.

TxGowan said…
It really was another stellar episode. I think what I liked best was how well Jim and Dwight actually work together. That and, of course, the hug. It's little things like that which fill out the characters so much.
1/12/2007