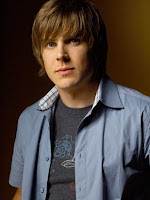 I'm not talking about the relative success of timeslot replacement Pussycat Dolls Present The Search for the Next Doll (though it's, er, sobering to say the least), but rather the news that Veronica's (potential) love interest Piz might be moving on.

Yes, ladies and gentlemen, Chris Lowell has signed on for a pilot. And not just any pilot, but the much buzzed about Grey's Anatomy spin-off starring Kate Walsh, and Taye Diggs.

Grey's creator/executive producer Shonda Rhimes is keeping any details about Lowell's character firmly under wraps. It's assumed that Lowell's participation is in second position to his regular gig on Veronica Mars, but Lowell's agents must have been given the go-ahead for Lowell to go out for pilots this season.

While it's not a definitive nail in the coffin for Veronica Mars, it's more than a little worrisome. CW still has not renewed Veronica for a fourth season and, while Kristen Bell and Jason Dohring haven't been cast in any pilots, Lowell's casting in the Grey's spinoff is not exactly a positive sign.

Fingers crossed that something--even, hell, an even further reduced episode count, if need be--can be worked out and fans of Veronica Mars (including this obsessive) get the chance to take another trip to Neptune next season.

The CineManiac said…
Jace,
Two things, first as little as Piz has actually been on the show, don't you think he could do a 4th season of this as well as a new show. Others have done it
Second, why hasn't anyone stepped up and started producing Episodic shows straight to DVD?
I know there's been several series that have sold well on DVD and made money but have been canceled. Let's just take something like Arrested Development as an example.
I don't have any hard numbers, but I know that the DVD sets of the show were on Amazon's top ten list.
Now why hasn't someone said, these DVDs are making money, why don't we produce 10 episodes of the show and put out a 2 disc DVD set and see how it sells, and if successful, make more?
Do you think this is something that could work down the line? I've thought about it for quite some time, a company that buys up shows like Arrested Development and Veronica Mars with a cult following and make more episodes taking them directly to DVD, isn't there a market for this.
I know I'd risk it if I had the money, alas I'm just a poor law student, and by the time I could afford doing this someone else will have done it first.
What's your opinion?
3/09/2007

Please don't take our "Veronica" away! I've had to survive through the departure of "Buffy" and "Felicity" and now the "Gilmore Girls" have taken a turn for the worse. I don't know if I can handle the disappearance of yet another intelligent, sassy gal like our Miss Mars.
3/09/2007

Anonymous said…
I'm guessing that Piz would be Kate Walsh's brother on the new show. There's a vague resemblance when he makes with the bitchy eyes. He seems too young to be a doc/intern so I'm guessing he'll pop up in her personal life.

Veronica's renewal surely has more to do with what the CW is developing for fall than the show's performance (or Piz's participation). If there's nothing to pair it with, it'll probably go. It seems like they'll have to replace Gilmore Girls as well. That's a lot of new programing to come up with. Here's hoping that they're not up to the task! Dontcha wish the development department sucks as bad as we suspect they do? Dontcha?
3/09/2007

Having read all of the drama pilot scripts that the CW is going ahead with, I can honestly say that the development department over there is just as bad as you suspect.

Anonymous said…
chris is playing a receptionist/surfer dude...he said this himself in a new interview

i dont think they would produce straight to dvd episdoes because how would they advertise it? theyd have to make at least a few tv episodes so people can watch. dvd tv shoes cost at least 30 bucks a season...i for one wouldnt spend that much on something id never even seen.

i think veronica is gonna be cancelled. im suprised it survived the upn to cw transition. the cw seems to be filling the lineup with low budget reality shows (pussycat dolls, beauty and the geek), sci fi wannabes (smallville, supernatural) and sitcoms (everything else) so it doesnt really fit in to the plan anymore.

but as a chris lowell fan (i loved him on life as we know it) im glad hes getting work. though i doubt this sitcom will be popualr. isnt it unsual to have a spinoff running the smae time as the original?
5/13/2007