"Rob Is Not Jesus" and Other Musings From the "Amazing Race" 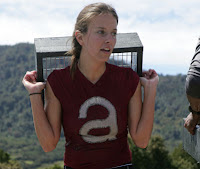 Was it just me or was last night's Amazing Race one of the funniest TAR episodes in a long time?

I never thought I'd say this but Rob and Amber are actually not driving me crazy this time around. They're playing smart and not paying attention to the other teams, which I think is definitely key to a long-term victory in this race. Plus, while they're being aggressive and wily, Rob isn't playing as dirty as he normally does. Finding a travel agent in the middle of the night rather than just camping at the airport was a smart move and it paid off for Rob and Amber, who managed to get on an earlier flight than most of the other teams. Good going, guys.

While Team Romber might not be driving me mad, several other teams are, including Eric and Danielle, Teri and Ian, the Guidos, and Charla and Mirna. When you're hoping that nearly half of the remaining teams take a powder, it doesn't really give you many choices in who to root for (Team Cha Cha Cha, the Beauty Queens, maybe Rob and Amber), but these teams are just irritating me to no end.

So it was hilarious to watch as Danielle attempted to do the roadblock at the fishery, in which you had to climb into a tank of fish and collect and transport them to another tank to reveal your next clue. Danielle seemed to be petrified of the fish (I'm still not sure why Eric didn't do this challenge) and she began having difficulty from the get-go. Eric, of course, didn't exactly play the supportive boyfriend role and just kept screaming at her to get a grip. Then he told her to use her breasts (seriously) to hold the fish in place. The entire scene was comical and I was hoping she'd have more of a meltdown than she did.

The Guidos meanwhile failed to write down the clue in its entirety (it appeared at the bottom of the tank) and ends up driving around aimlessly until they stumbled onto Charla and Mirna, who were also driving around aimlessly, except they had the foresight to kidnap a local and hold him hostage in their car. They soon recovered and together managed to find the white water rafting part of the detour (still not sure why no one chose the 40-foot rock climbing task).

Charla and Mirna managed to finish before the Guidos, but ran out of the tent still very much in a state of dishabille (Mirna to their hostage: "I'm sorry I'm wearing a bathing suit. It is very weird, I know.") and left the keys to the car in the tent. Why Mirna couldn't have run back and gotten them herself, I'm not sure, but she made Charla (wearing a frilly bathing suit/party dress) accompany with her and then run all the way back to the car again. Odd. But unfortunately, neither they nor the Guidos were eliminated.

I had a feeling that David and Mary wouldn't be sticking around for long this time on the Race. I loved the cheesy flashback of the Cho Bros and I am going to miss these two. They always kept things interesting, even if they cannot ever seem to communicate properly with one another. It's a shame as they were doing so well earlier on in the episode (and Dave overcame his fear of water with not one but two water-based challenges this episode), but it all came down to a wrong turn (as it often does on TAR). If only Mary had listened to Dave (or had been looking at the signs) and realized that they had missed the turnoff, they would probably still be in the race. But still, how many people get to say that they've run the Race twice in their lives?

I was completely freaked out that the Beauty Queens might be eliminated after they failed to find the clue at La Maquina. Instead, Dustin and Kandice ended up directly at the white water rafting task, misinterpreted what they were supposed to do, and boarded a raft, searching the river for clues. (Sadly, it was a very blonde moment.) They arrived at the pit stop fourth (after Rob and Amber, Uchenna and Joyce, and Eric and Danielle) only to have Phil tell them that they needed to have all of their clues in order to check in (and here I thought they'd just be given a time penalty). Miraculously, the Beauty Queens managed to locate La Maquina, snag the clue, and return to the pit stop... still in fourth place. Pretty darn amazing, if you ask me. I'm glad these two feisty females are still in the mix and hope that they get their act together (directions have never been their strong suit) to end up competing with Danny and Oswald and Rob and Amber rather than the back of the pack.

Next week on the Amazing Race: Rob and Amber run afoul of Charla and Mirna during a cab-snatching incident, Charla accuses Amber of lying, and teams race to the pit stop in an ending that CBS promises "will have everyone talking." Ooh, what could it be?

On tonight's repeat episode ("Everybody Hates Promises"), it's shades of Tricky Dick Nixon as Chris is forced to defend himself at impeachment proceedings after the school paper runs some unflattering stories about his presidency.

It's Day Six of 24. While FOX doesn't give us much in the way of previews, here's what we do know: following last week's attempted assassination on President Palmer, Logan becomes increasingly drawn into the administration, Reed Pollock and Tom Lennox are, well, trapped in an awkward situation, and Jack follows some new leads.

Anonymous said…
I laughed a LOT during this episode.

I am so frustrated that we were thisclose to getting rid of Charla and Mirna. Ugh - I can't stand them.

Danielle C.F. Maris said…
This episode was HILARIOUS. Danielle vs. the fish was a great moment in reality TV. I am so sick of her and Eric and his nipple piercings. Gross.

I am sad, though, that the blondes are being so, well, blonde. They're usually more on the ball. But they did finish 4th (in spite of all the confusion) so, hopefully, they're still in this to win.

I will miss David and Mary. I was really hoping that the Guidos or Charla and Mirna would be eliminated. Surprisingly, Rob and Amber aren't bothering me really this time around. And Amber kicked ass on the fish challenge!
3/05/2007

par3182 said…
why are teri and eye-an irritating you? they rocked this week, especially teri - who enjoyed the fall off the boat and didn't put up with mirna's crap at the airport. those two are like different people from the snappy couple they were when they raced in season three.

david and mary - good riddance, they had no business being in all-stars anyway
3/05/2007