Checking out the Contestants on "Top Model" 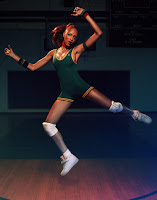 Longtime readers know that I am a relative America's Next Top Model newbie, so it's rather amusing that after the last cycle, I've become an obsessed convert to the ways of Tyra and these modeling tyros.

Sure, Miss Jay might annoy me as much as humanly possible, but I try to put those ever increasingly "outrageous' antics out of my mind each week as we see Tyra take some pretty-if-average young women and transform them into top models. Or, well, semi-successful print models, anyway.

I was worried that last week's Pussycat Dolls Presents The Search for the Next Doll would leave a sour taste in my mouth (Ken Mok is, after all, the executive producer on both reality series), but I have to say that I have all but forgotten that cheese fest. Somehow, Top Model manages to toe the line between seriousness and cheesiness but, unlike Doll, it hasn't fallen completely over the edge into ridiculousness. (And Top Model tends not to show its contestants repeatedly vomiting.)

But let's put that aside. This cycle of Top Model which started a few weeks ago, has proven to be just as deliciously addictive as its predecessors and the girls are the perfect mix of wannabes: some beautiful and talented, others just beautiful, and a few who terrify me but manage to produce stunning photographs (Jaslene, honey, I'm looking at you).

So which contestants have already become my favorites? Let's see, I already adore Felicia; she's got the lithe grace of a dancer and manages to inject movement and fluidity into every shot, plus she's gorgeous (even if I don't really think she looks like Tyra). She's one to watch, if she keeps the energy and dedication up at the photo shoots. I love Whitney; she's a plus-size model who doesn't wear that label like a curse, instead flaunting her curvaceous body; however, she tends to overthink the photo shoots and needs to follow her instincts a bit more.

I think that Brittany has a very unique look and manages consistently to surprise with her photo shoots and runway performances; she's got a striking look that screams model and the confidence to match and manages in each and every shot to connect with the camera. Keep an eye on this one. Also, plus size Diana looks absolutely stunning when she's posing. (I can't wait to see her transformation after this week's makeover.) The jury's still out on Sarah; she seems to have toned down the officious attitude; she's a canny photographer in her own right and understands modeling but is lacking that spark (and sparkle) that screams model. Then there was the matter of last week's prom runway challenge; her barely-there top sort of, um, shifted, exposing the girls to an audience of high schoolers. On the one hand, I think it was amazing that she remained professional and didn't break a sweat or freak out about the wardrobe malfunction, but you do also have to be aware of your audience and leaving herself exposed (rather than covering up casually by pulling the top into place) was inappropriate.

Who don't I like? Sure, I feel happy that Jaslene finally got the chance to appear on Top Model (after trying out three times) and she photographs beautifully but girl is scarily thin. Outright skeletal. It's a little terrifying, even if that's more likely than not the norm in the modeling industry. (If the camera does add ten pounds, I am truly frightened.) I was pleased to see her taken down a peg in the runway challenge as she was the worst walker in the competition. I think Jael has that sort of alterna-girl look that the judges find interesting, but I find her whole personality to be completely tiresome, from the "surprise" nudity to her bewilderment at judging panels to her fear of winning because it might change how the other girls view her. Um, Jael, it's a competition, remember?

I cannot, cannot stand Renee or Natasha. I think Renee is a gorgeous woman (she reminds me, each week, of Amanda Righetti) but her attitude is horrible; instead of focusing on her own performance, she obsesses over the other girls and is the worst kind of catty: she think she's just being honest. Ouch. Then there's Natasha. I don't think she's as beautiful as everyone is making out but, putting that aside, there's nothing there behind her eyes. Sure, there's a bit of a language barrier there (making Mr. Jay more than a little irate during photo shoots) but she doesn't seem to even understand the very basics of modeling. It's actually quite embarrassing as she believes herself to be the best one there, rudely instructing the other girls not to step on her cues, and then going on and screwing up. Har har. Payback's a bitch.

As for me, I'm just excited to see what happens next. The all-important makeover episode is tonight, which means we'll get the opportunity for lots of drama, tears, and tantrums as the girls are forced to receive top makeovers from top stylists for free. Or will these girls surprise us by being the first group to go along with the transformations with a minimum of frenzy and hissy fits? Find out tonight.

I can't tell you how happy I am that Lost is back on the air again. On tonight's episode ("Par Avion"), it's Claire's time to shine as we get a flashback episode focusing on the island's newest mommy, Sayid and his team stumble onto a gigantic alarm system that looks like it might have the added benefit of making things extra crispy to boot, and we learn the connection between two characters. Gee, I wonder who they could be?

I, too, really like Felicia, Whitney and Brittany (for a sec I had to remember who Brit was, cause I don't think her name fits her at all. i always call her "the bartender chick."). My favorite went home week 1, so...

In disagreement w/you about Jael. The first week I wasn't sure, but last week I said, "I think I like her." And my friend said, "Oh, totally!" She's one to watch, for me. I also really like Diane, but she needs a little more life.

Total agreement about dislikes - I HATE Renee and Natasha. Especially Renee, and for all the reasons you say. She is a bitter, mean person who is a terrible role model for her child.

Danielle C.F. Maris said…
It's sad about Renee because she's a gorgeous girl but is obviously extremely insecure.

Felicia photographs really well and seems to have a fun, peppy attitude (unusual on this show) and I think she's my favorite so far.

Both of the plus size models are beautiful but need to give us something more exciting in their photo shoots.

Anonymous said…
Oh Man, I agree with you about this show and your assessment of all the girls. It's insanely addictive.

I want Brittany to win, but after watching tonight's episode (the one with crying!) I wonder how manipulative the editing on this show can be...

Felicia has a lot of potential, I think Jaslene has peaked already- or is close to it- Whitney is pretty, but isn't model material, and Sarah is adorable-looking but annoying acting.