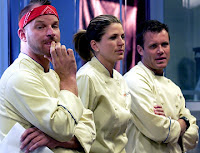 Ah, the final five. The knives always do come out at this point, but I was happy to see on last night's episode of Top Chef ("Manhattan Project") that the cheftestants' knife skills were used in pursuit of the top prize rather than, you know, stabbing each other in the back.

Quickfire Challenge: After tooling around Manhattan for a bit and sampling some street food, the chefs were invited to have lunch at Le Cirque with legendary owner Sirio Maccione, a dapper Italian gentleman whose restaurant has become synonymous with high-end New York cuisine for several decades. They were treated to taste an exquisite off-the-menu lunch: russet potato-wrapped sea bass with creamed leeks which has been a specialty at Le Cirque for twenty years. Which sort of made my culinary spider sense tingle. Sure enough, just as the chefs settled into their chairs, Padma dropped a bombshell: their challenge would be to recreate the dish they had just eaten, in terms of taste and presentation, in only twenty minutes.

Hung impressed me immensely in this challenge, which gave him the rare opportunity to show off his classical training. His dish looked gorgeous and he cooked the fish perfectly AND remembered to wrap the sea bass in potato strips that were thick enough not to burn but thin enough to crisp in the saute pan. While others may quibble, I really don't blame Hung for not telling his fellow contestants how exactly he recreated the dish. After all, that WAS the challenge, so I was a little annoyed at Dale for getting miffed over this.

I was also taken aback by how much I'm suddenly rooting for Casey, who also prepared an elegant, perfectly cooked and seasoned recreation of Maccione's legendary dish. I was hoping she'd win this challenge, but alas, it went to Hung. Casey has really stepped up these past few episodes in a major way and she's become the one to beat. It should be a very interesting finale, if in fact she faces off against Hung... which at this point is her main competition.

As for the others, I wasn't really impressed by their performances. Dale and Brian both burned the potato "papillote" and Sara? Well, our Jamaican friend got so frazzled that she failed to cook the fish, leaving the center completely, inedibly raw.

Elimination Challenge: It was only fitting then, after using some classical techniques to recreate Maccione's sea bass, that the chefs continue this theme. Arriving at the French Culinary Institute, the contestants were shocked to learn their next challenge: create an awe-inspiring dish built around the simplest of ingredients--chicken, yellow onion, russet potato--along with $200 worth of ingredients from the Greenmarket in Union Square (an old haunt of mine).

I was absolutely stunned by what Brian put on the plate but even more so that the judges--including the deans of the French Culinary Institute--liked what they ate. In my eyes, it was a disgusting pile of green sludge on top of a pile of brown poo. Brian called it a Spring Harvest Peasant's Feast, with pheasant sausage, chicken, and a potato and ramp puree. I'm still amazed that it tasted as well as it did, a rich, hearty concoction that was a little overwhelmed by the use of the pheasant. But still, no seafood in sight, which is a change for our Brian.

Casey set out to do an interpretation of coq au vin, based on a recipe of her French grandmother, with potato puree, sauteed ramps, and asparagus. Her dish was beautifully plated, elegant, and intensely focused. Yes, coq au vin is traditionally cooked using an old rooster, but ease up, Tom Colicchio; I thought she created a stunning dish under some intense guidelines and thought classically, to boot, considering where she was.

Sara's dish--a fricassee chicken served with seared breast, couscous and potato risotto, and confit onions with a microgreens salad--definitely suffered in the execution. It was an overly ambitious concept that was completely sabotaged by Sara's own skills. The chicken served was either rubbery or undercooked (danger, Will Robinson!), the seasonings were off, and the onions were actually pickled, rather than confited. Not her best effort.

Oh, Dale, when will you learn that less is truly more on the plate? These chefs always think in duos and trios and it undoes them every single time. Dale set out to do his most ambitious dish to date, a truffle-honey duet of chicken with leg confit, asparagus, and potato and onion puree, but left off the honey and rosemary sauce that could have linked the two halves of this plate. As it was, the dish was schizophrenic at best and showed a lack of focus, conceptual skill, and organization. But would it be enough to send him home?

Finally, there was Hung who served an elegant sous-vide chicken with a crisp square of skin, pommes Dauphin, petit greens, and a natural jus. It was beautifully plated, skillfully executed, and absolutely delicious. Yes, the judges had one complaint in that the pommes Dauphin weren't exactly light and airy, but that's a mere cavil compared to what was presented by him in this challenge.

Ultimately, it was hardly surprising that Sara would be the one to pack her knives, even if she did refuse to accept Gail's criticism about the undercooked chicken. (Me, I was more surprised to see Gail in the flesh as I thought she had perhaps disappeared off the face of the planet.) Sara's dismissal leaves Hung, Casey, Dale, and Brian to fight it out for the final cook-off in Aspen. Who do you think will make it to the final two and who should pack their knives now?

Next week on Top Chef ("Finale, Part One"), the remaining four chefs jet off to Aspen, Colorado, for the semi-final and some rather interesting in-the-wild cooking, only to fall victim to some hard questioning and even harsher criticisms from the judges. It all starts here!

Bill said…
I don't watch reality shows at all, but the title of this post made me think there was some kinda Cylon cooking show.
9/20/2007

Anonymous said…
I am SO in agreement with you re: Hung not telling anyone how he did his quickfire. It's a competition, people!

Also, SO in agreement re: Casey. I am totally rooting for her now. I really thought she should/would win the quickfire and also the elim.

re: this, "Yes, coq au vin is traditionally cooked using an old rooster, but ease up, Tom Colicchio;"

TOTALLY. I just kept rolling my eyes. I actually looked up coq au vin on Wikipedia last night, since i didn't know what it was and it said this, "Coq au vin (French: "rooster with wine") is a French fricassee of chicken cooked with wine, lardons, mushrooms, and garlic. Older roosters are traditionally used because they contain a lot of connective tissue, which creates a richer broth when cooked."

Traditionally used, yes, but still - the recipe calls for chicken. Suck it, Colichio! :)

Danielle C.F. Maris said…
I can see why everyone was annoyed at Hung for not helping CJ load his cart on last week's episode but to be upset with him for not giving away how he prepared his dish in the elimination challenge? That's just crazy. I agree that Dale was totally out of line even to ask him.

I loved this elimination challenge. It was great watching the five contestants get stared down by the line cooks in the kitchen. Some of them got so nervous! But I thought that Hung and Casey both did an excellent job and hope that they are the final two.

Since Tre is no longer in the competition I am rooting for Casey to win. Her dish last night was beautiful even though Colicchio was obsessed with telling everyone that it was not coq au vin. Yes, yes, Tom. We're happy you know the definition of coq au vin. But she could have called it s#*t on a plate and it still would have been great. Besides, aren't they always encouraging contestants to put a fresh spin on old classics? Cause that's exactly what Casey did.
9/20/2007

Anonymous said…
The irony of Hung not giving any helpful advice to the others and then whining when non of them would help plate his dish was not lost on me.
I was really hoping Casey would win just to hear what derisive comment Hung would have about the judges.
9/21/2007

rockauteur said…
Sara deserved to leave weeks ago. I am glad she finally left. She is a cheese maker and just needs to return to cutting cheese.

I wasn't rooting for Casey until recently when she decided to step it up. She and Hung seem to be the only real contenders left. Let's hope Hung survives the producers red herring promo for next week and makes it to the final two.
9/21/2007