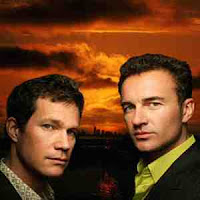 Wondering just when FX will launch Season Five of its plastic surgery drama Nip/Tuck? (Or at least when they'll stop running those slightly creepy commercials with the Hollywood sign and that eerie cover of Chris Isaak's "Wicked Game"?) Look no further.

FX has announced that it will launch Nip/Tuck's fifth season--featuring Christian and Sean making the move to beauty-obsessed Los Angeles--on October 30th at 10 pm.

Doesn't it seem like forever since we had a new episode of this culinary competition? On tonight's episode ("Chef Overboard"), the remaining chefs face off in a supermarket-based challenge and then head to the high seas, where they must arrange a buffet meal. A buffet while getting buffeted by waves? This I want to see.

Anonymous said…
I liked the new commercial I saw last night, with the tattoo of Flolrida turning into a tattoo of California. At least it was something new.

Anonymous said…
I am literally counting down the days until Oct 30th. Just picked up my Season 4 dvds so they'll satiate me for a bit.
I am so diggin the move to LA- lots of new drama, beautiful people and juicy plot lines. 54 days and counting.......
9/06/2007