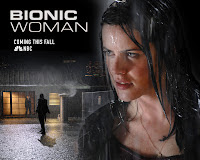 Following the departure of showrunner Glen Morgan last week (due to "creative differences"), NBC has secured the help of a certain in-demand writer on freshman drama Bionic Woman.

Friday Night Lights showrunner Jason Katims has joined the staff of Bionic Woman as a consultant; his task will be to break stories and write episodic scripts on the drama, which stars Michelle Ryan as a bionically enhanced barmaid/secret agent.

NBC's decision to bring Katim on board is a direct reaction to Morgan's departure; previous reports indicated that executive producer David Eick (Battlestar Galactica) would take over Morgan's responsibilities, along with Jason Smilovic.

Katim is himself no stranger to science fiction: he created and executive produced the shortlived WB (and UPN) series Roswell.

As for Friday Night Lights, fans should hope that Katim's willingness to lend a hand on the struggling Bionic Woman would earn him some points regarding FNL down the road.

Anonymous said…
This better not mean he's leaving Friday Night Lights. I would be really pissed off if that is the case.
9/10/2007

rockauteur said…
Or it could mean that Katims is preparing for an end game, should FNL pull a Boomtown and get cancelled after four Friday airings of its second season.
9/11/2007

Anonymous said…
I think he's will definitely help out with the drama aspect of Bionic. They've definitely got the action down but the relationships could use some work.
9/11/2007