The Final Cut is the Cruelest: (Delayed) Reactions to the "Top Chef" Finale 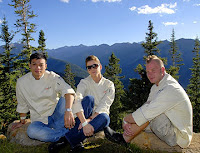 I'm back now from London after a whirlwind week of gastronomic (not to mention liquid-based) excess and rushed home to catch the season finale of Top Chef that I had missed. (Note to self: when taking a business trip abroad, avoid scheduling it during the live finales of one of your favorite series.)

I have to say that I was pretty surprised with the ultimate result; this season has had several contestants that I thought would make it all the way to the end and walk away the ultimate victor (ahem, Tre) but it looks like it just wasn't in the cards for some. Going into this finale, I was really rooting for Casey to walk away the winner of Top Chef 3, but it wasn't too be. Sadly, I was also hoping that Dale would manage to pull this victory out of his hat after he seriously wowed me with his dishes.

In the end, the judges picked Hung. Yes, his sous vide duck with truffle-scented broth and mushroom ragout was "three star Michelin" worthy (according to guest judge Todd English), but Hung has done several dishes sous vide during this competition. The hamachi with potato chips, tomato vinaigrette, and olive oil powder was a nice way to begin but lacked acid; funnily enough it also reminds me of a Tom Colicchio dish served at Craft, though Tom's subs in radishes and horseradish cream to boot. His second dish--prawns with palm sugar and coconut glaze, cucumber radish salad, and ocean-scented rice. Did I mention that there was coconut foam? (You know how I feel about the usage of foam in this competition.) And I was completely flabbergasted that the judges awarded him the win after being less than blown away by his final course, a standard molten-centered chocolate cake with raspberry, nougatine tuile, and vanilla creme fraiche. It was a bland coda to a series of dishes that were thematically linked together with Asian-inspired flavor profiles.

Is he a fantastic chef? Yes. Should he open his own restaurant? Sure. But did he deserve to win Top Chef 3? I'm not so sure.

I will say that Dale really, really impressed me. He seemed to cook this dinner fully aware of both the wow factor and the need to serve locally produced seasonal ingredients in a masterful way. While Hung played it safe with sous vide and chocolate cake, Dale took HUGE risks with his dishes, most of which paid off. (Except for the curry explosion that was the lobster and gnocchi dish, that is.) His first course, a foie gras mousse with peaches and Ras El Hanout was a little overpowering and, yes, could have used toast points or similar, but he admitted as much at the judges' table. I am utterly in awe of his seared scallop with purslane, raw sweet corn, and marinated grapes; this was a confident, robust, visionary dish that belies his skills as a talented chef. Same too with his duck fat-poached Colorado rack of lamb with deconstructed ratatouille, raw summer squash, cherry tomatoes, and sauce vert, a beautifully constructed dish that was ambitious and realistic in its scope.

Poor Casey. She really just did not have it together during this final challenge and make a few fatal errors along the way. The pork belly dish (served with ginger pea shoots, roasted peach, and cardamon creme fraiche) was a terrible, terrible decision from the start as there was no way it was going to be succulent and perfectly cooked in time for dinner and why oh why did she not even taste it before sending it out? (Colicchio does a pork belly at Craft with an amazing Madras curry sauce that is divine, FYI.) Her cinnamon-scented scallop and foie gras with Gala apple and celery combo was completely ruined by her inclusion of salmon roe, which spoiled the dish completely. Same too with her sake-poached prawn in lobster, mushroom, and yuzu broth; which was a mess in the bowl and suffered the same usage of salty, overpowering caviar. Her surprise dish--a seared Colorado sirloin with chantrelle and ruby chard, crispy fingerlings, red wine, and parsley puree--was an admirable attempt but it seemed completely taken over by sous chef Howie and was more indicative of his style of cuisine more than Casey's. Alas, a win for her was not meant to be.

Ultimately, I really did think that Dale would walk away the winner, so I was stunned that the judges gave this to Hung instead. It doesn't meant that I've lost faith in the series (the decision to axe Sam last season was more damaging) but it does mean that I am slightly confused by what the judges want: entertainment over creativity.

Still, I'm already anxious for the next installment, so that's got to account for something.

Next week on Top Chef, it's the reunion special, so gather round, girls and boys, and learn what truly went down in that test kitchen.

You know how much I'm already in love with this dramedy, from creators Josh Schwartz and Chris Fedak, so why don't you do me a favor and tune in? On tonight's episode ("Chuck Versus the Tango"), Chuck is sent on his first undercover mission and assigned to take down an enigmatic arms dealer at an art auction. I've already seen the episode and absolutely loved it. Watch it or I'll send Casey after you.

The third season of Everybody Hates Chris continues tonight with a new episode ("Everybody Hates Caruso"), in which Caruso gives up his status as school bully after he's beaten up by a karate kid.

On tonight's episode ("No Man is an Island"), Justin tries to distance himself at school from Raja when he becomes friends with an unpopular kid.

It's Kevin McKidd (Rome) as a time-traveling newspaper reporter in a drama that's more about human interactions and the nature of choice than, say, technicolored time machines. On tonight's episode ("Game Three"), Dan travels 18 years into the past where he must decide whether to save a woman from an imminent disaster or focus on an addict. Meanwhile, Katie learns that Dan has been in touch with Livia in the past.

Anonymous said…
Aargh - I was so angry! I usually record the 7pm showing, the first showing. But because it ran 15 min long, and I had two shows recording at 8, I had to record a later showing, the 10:30.

So, I sit down, press play and...yup - the showing before bled into this one so I immediately saw (with no time to turn away) confetti raining down on Hung and Padma saying "Hung - you are the top chef."

Danielle C.F. Maris said…
The new live aspect of the finale was really annoying and unnecessary. Otherwise, it was an interesting final episode. Dale really stepped it up and was extremely creative. Hung may have played it safe but his execution was flawless and, attitude aside, I do think he is a brilliant chef and will go far. Poor Casey. I was really hoping she'd pull it off but was too frazzled to get it together. I really would have liked to have seen Tre in the finale too as I'm sure he would have done great things.
10/08/2007