Heavy is the Head That Wears the Crown: Trust Issues and Bond Flicks on "Chuck" 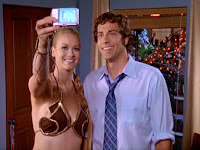 I liked last night's episode of Chuck but I can't shake the feeling that the series, at times a deft blend of comedy, action, and romance, isn't quite living up to the potential displayed in the pilot.

Usually a pilot offers a cursory look into a new series' world, sets up its characters and ongoing situations, but ends up just a basic foundation for the rest of the series, a blueprint that over time fades into the background. Chuck's pilot happened to be a fantastically strong entry, skillfully executed in terms of characterizations, plot, and action.

Unfortunately, I don't feel that any of Chuck's subsequent episodes have been as strong or as tightly plotted as that original pilot episode. Sure, I've enjoyed several of the episodes, laughed out loud, cringed, and been on the edge of my seat, but they all lacked that same spark and energy of that first installment.

Sure, there were things about last night's episode of Chuck ("Chuck Versus the Sandworm") that I loved: the scenes between Chuck and evil weapons designer Lazslo (guest star Jonathan Sadowski) in which they bonded over, well, Bond; the discovery of the bugs in Chuck's apartment (particularly the one in Sarah's gift); the way that Captain Awesome has inappropriate physical contact with everyone around him; the scene in which the Captain attempts to make a man out of Morgan via the tuck and taming his mane; Morgan's speech to the HR drone; Chuck and Morgan's desert-island sandwich conversation; Chuck, having learned about trust, cutting the green wire on the bomb; that final scene in which Sarah photographs an actual moment with Chuck rather than a faked one. And did I mention Chuck's terrifying hairpin ride aboard his driver's seat? Awesome, as one might say.

Still, I couldn't help but feel that there was something missing. I don't feel as though we've progressed with any of the characters' development (though Morgan was, thankfully, toned down a bit and gained some semblance of maturity by the episode's end) and at the end of the episode, we're still rather back where we began. That's the nature of a procedural series, yes, but I want more. I want to feel as though we're moving towards something, an overarching plot or purpose to the series that makes me want to rush back to watch again next week.

Don't get me wrong. Chuck is hands-down one of the strongest entries in the war of the new fall series but, like Chuck Bartowski himself, I don't feel as though it's reaching its true potential.

What do you think? Do you like Chuck just the way it is, with self-contained stories from week to week? Or do you wish that there was a stronger story arc at work here?

Next week on Chuck ("Chuck Versus the Alma Mater"), Chuck returns to where his life seemingly went wrong: Stanford, where he must help a college professor and learns that perhaps it wasn't an accident that Bryce Larkin, the man behind most of his life's misfortune, sent him the Intersect.

The CineManiac said…
I Love Chuck! I watched the last two weeks worth of episodes last night and had a blast doing it. But I can see where you're coming from. I think the show would benefit from a season long arc, but maybe that's something that next week's episode is going to set up, seeing as how it brings back Brice Larkin.
Plus, I think there is one thing that is creating an arc and that's the relationship between Chuck and "Sarah", something I personally look forward to every week.
10/30/2007

Shawn Anderson said…
In a year of weak new series, Chuck is doing pretty good. I've got it as my #1 new series, with Pushing Daisies close behind, and the rest barely a blip (Reaper at times, is up there).

I think next week's episode will add some much needed mythology to the Chuck character, and we can hopefully begin to forgive these repetitive "Chuck doesn't trust his handlers and screws up" storylines.
10/30/2007

Anonymous said…
Jace, I agree. Chuck is good but it should be great. None of the "adventures-of-the-week" have been as strong as the pilot. And, even though I like both of the actors, I feel like there's no real chemistry between Chuck and Sarah. I know Sarah's still pining after Bryce but there should be some spark between her and Chuck and I'm just not feeling it.

Plus, Morgan's really not that funny. I think I enjoyed him more as "straight-laced, uptight Morgan" than when he's being a buffoon. And in his makeover scene I felt like he was upstaged by Captain Awesome.

I think that next week's episode could be really good, though. Fingers crossed!
10/30/2007

Anonymous said…
I love the show...and I think the characters are moving forward. Just slowly. Chuck has come to terms with the fact that he has feelings for Sarah. We have the impending doom of Adam Baldwin's orders. We have Chuck maturing. And next episode looks like a peek at the history of Chuck/Bryce.

I like my Buffy-ish overall season plots, but I feel this show could have one pretty easily that shows itself in the second half (assuming it gets a full season pikc up).

Anonymous said…
Jace, I was almost afraid to say anything to you about it, because I know what a proponent of the show that you are, but, yeah... the pilot was spot-on, and I've been looking for that same magic to reappear ever since. :/
10/30/2007

Bill said…
Not only do I agree, I've been creeped out at how similar Chuck and Reaper have been. Like not just the "underachieving guy working in a big box store gets super powers" thing, but episode to episode, they frequently touch on the same points. Both had recent "the women in the main characters' life gets pissed at how he's always absent" episodes, and this week had "the main character gets angry at his wacky sidekick's immaturity, threatening to destroy their friendship, but in the end they make up" episodes. At least Reaper had Patton Oswalt.

Chuck isn't in danger of losing me, but I'm no longer going to make time to watch it on Mondays, I'll just get around to it whenever.
10/30/2007

Eric said…
For me the problem with Chuck is that the action and spy stuff is too cartoonish for the show to earn any honest depth in its dramatic moments. The show feels like something of a throwback, like a Stephen J. Canell show from the '80s in its setup and most of the missions, and that just doesn't jibe with Buffy-level relationships and emotions, which I think the show aspires to.

The thing is, if the show stays a procedural, with static characters, I don't think it can survive for much more than a season in the current TV environment. Chuck's potential audience likely wants more than that.
10/31/2007

rockauteur said…
I agree also... Perhaps next week's "Origins" episode will add some much needed mythology into the show and help with the character development. And when is Rachel Bilson showing up?

Lately, we haven't seen much of Adam Baldwin's character or Sarah Lancaster's (she'll always be Madison to me). I hope we see more of them!
10/31/2007

Unknown said…
I agree with The CineManiac, that Chuck and Sarah's relationship is the arc. Seeing Chuck struggle with what to do about his feelings for Sarah while she struggles with the conflict between her job and her growing feelings for Chuck.

Bill, I think it's subtle and not as cartoonish as Reaper. (I really enjoy Ray Wise, but every scene between Sam and Andi makes me cringe. He's SOOO stupid and treats her SOOO badly. Fortunately, they're not doing that on Chuck.

Jace Lacob said…
Skst, I DO like Chuck, which is why I'm slightly disappointed by the fact that a serialized arc hasn't yet materialized and have been a little let down as, while it's a fun series, it hasn't yet lived up to the promise and potential displayed in the pilot.
11/02/2007

Dani In NC said…
What I really want is more details about why Chuck got kicked out of Stanford and why he didn't bother to finish his college education. Hopefully the next episode will shed some light on that.
11/04/2007