FX Orders Fifth Season of "Rescue Me," No Sign of "Damages" 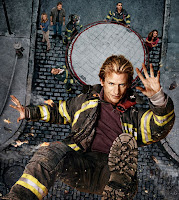 Sigh. FX is really beginning to infuriate me.

How can they even think about ordering a fifth season of Rescue Me, with a super-sized season of 22 episodes to be broken into two cycles, while the fate of the recently wrapped Damages is still up in the air?

"[Rescue Me] has been a great source of pride to FX and remains one of the cornerstones of our respected brand of original series," said John Landgraf, FX's president/general manager, in a statement.

Production on Season Five begins in early 2008 and the entire cast will return for this latest season. The super-sized order comes as a bit of a surprise as Rescue Me, to date, had only produced standard cable-sized seasons of 13 episodes.

Which is all fine and dandy for Rescue Me fans, but what about Damages? There's still no word from FX about a possible Season Two (so ably set up in the brilliant season finale) but apparently a final decision about the taut legal thriller's fate will be made imminently.

Fingers crossed that FX is far less bloodthirsty than Patty Hewes and grants Damages a stay of execution.

Wax nostalgic with the Christmas special finale of one of the greatest television comedies ever created, The Office. You know you want to stay in and watch that scene with Tim, Dawn, and the art supplies.

Anonymous said…
I would be such a happy girl if they picked up "Damages" for a second season. But it's not looking good. And the strike might further complicate things.
11/02/2007