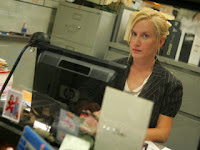 Break out the saxophone-playing baby posters.

At last, some good news for the cast and crew of NBC's The Office, which saw production shut down on the second day of the WGA strike during the filming of their final script.

Angela Kinsey, who plays dour accountant Angela Martin, has announced that she is pregnant with her first child, according to a report in US Weekly.

“She and her husband are very excited,” the Kinsey's rep told the magazine.

Kinsey's husband is TV writer Warren Lieberstein, who has written for such series as Carpoolers and All of Us. He also happens to be the brother of writer/actor Paul Lieberstein, who plays Toby on The Office.

No word yet if the series' producers will write Kinsey's pregnancy into the fourth season's storyline, though how hilarious would it be if the prim and proper Angela--currently embroiled in a love triangle with Dwight and Andy--had a bit of a paternity issue?

On tonight's episode ("Chuck Versus the Nemesis"): Bryce returns to the land of the living and hopes to convince the CIA that he never went rogue, while a secret organization within the intelligence community tries to track down and destroy the Intersect; Chuck realizes he can never be with Sarah after seeing her with Bryce; Morgan is left in charge of the Buy More on Black Friday.

It's Kevin McKidd (Rome) as a time-traveling newspaper reporter in a drama that's more about human interactions and the nature of choice than, say, technicolored time machines. On tonight's episode ("Blowback"), the continuation of last week's two-parter, Dan learns a valuable lesson about not going off mission when the kidnapper Aeden Bennett returns to seek revenge and targets Katie; Dan travels to 1983, where he discovers a young criminal's origin; Livia makes a discovery about her mission.

Unknown said…
Welcome back! I hope the writers don't make Angela pregnant. Those storylines never do well. Either she has a baby, which kills comedy, or she does a Melrose Place down a flight of stairs, which ... kills comedy.
11/25/2007

Anonymous said…
I actually think that a pregnant Angela could be a very funny storyline for The Office. There's a lot of different directions you could take it. As long as she doesn't put a hat on the baby and make it hold a sax!
11/26/2007