The Toga Party: The Action Kicks into High Gear When "Chuck" Returns to Stanford 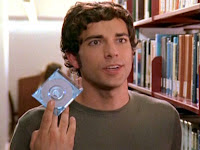 Whew. After my disappointment last week in an average but uninspired episode of Chuck, this week's episode may have turned the tide, introducing an intriguing subplot about one Chuck Bartowski's recruitment by the CIA back at Stanford and revealing why Bryce Larkin seemed hellbent on destroying his life in college.

Last night's installment of Chuck ("Chuck Versus the Alma Mater"), written by Anne Cofell Saunders (who has in the past written for Battlestar Galactica, Eureka, and 24), served to push the boundaries of the story we've seen thus far, offering a different vantage point with which to view the past while forcing Chuck and Sarah to exorcise their shared demons. Plus, Morgan didn't irk this episode as Saunders created an atmosphere as equally fraught with peril at the Buy More as Chuck was experiencing in the field, no mean feat as thus far the only episode that has pulled this off was the series' brilliant pilot.

Chuck. It was nice to see Chuck have to face up to his past and return to Stanford, the site of his infamous defeat. This episode gave him some depth as well as advanced the plot, even if Chuck appeared to look exactly the same in 1999 and 2003 as he does today. Loved the importance of the book stacks in the library in his flashback and the fact that Bryce and Chuck played spies together. It also makes much more sense now that the CIA did try to recruit him out of college and I'm seeing the tantalizing elements of a possibly overarching storyline with the disc and the Intersect. Just why did Bryce steal it and send it to Chuck? And how is this connected to Professor Fleming? (Whose name is a nod to Bond creator Ian Fleming, perhaps?)

Bryce. I'm really hoping that somehow Bryce Larkin is still alive, despite the gunshot wound he received at the hands of Casey. Casey doesn't seem like the type of guy not to take a kill shot when he has the opportunity, so I am really not all that sure how Bryce could have managed to survive that wound but I'm holding out hope that he's still out there somewhere. After all, we may have learned why he got Chuck thrown out of Stanford: he was trying to save him from a life in the CIA, a reason far less demonic and more altruistic than Chuck ever realized. Not sure why he stole Chuck's girlfriend Jill (an EverQuest junkie), but perhaps that sealed the deal and got Chuck as far away from Stanford and Bryce as possible. Still, why did Bryce send Chuck the Intersect? Was it because he scored so high on his symbolism and coded visualization tests? And is it just a coincidence that Sarah is involved with protecting him? Hmmm.

Sarah. I loved that final shot of Sarah as she realizes that the guy she loved possibly wasn't evil after all. Bryce had a reason for getting Chuck kicked out of school and he may have had a justifiable reason for stealing the Intersect too. Which means that Sarah is going to have some tough choices to make down the road (should the series be picked up for the back nine): does she follow her heart and her instincts and believe that Bryce was doing good or does she stick to her duties as a CIA agent? Choices that will be a hell of a lot more complex should Bryce resurface.

Loved the junior spies who rushed to Chuck, Casey, and Sarah's defense. There could be an entire series there just with spies-in-training in university but as it is it worked as a neat single episode trick, especially the jumping agent who picked up Chuck's voicemail and knocked out his Icelandic assailant. Also loved the shoutout to Zork, one of the best text-based games ever created (though as a kid I was also partial to Wishbringer and Suspect), which made another appearance last night in order to deepen the appearance of the riddle in the pilot episode. And the fact that the face paint Captain Awesome used for the Stanford-UCLA game may not ever come off.

All in all, last night's episode of Chuck was funny, action-packed, and emotionally resonant, all of the elements that should go into each and every episode of this series. It showcased the true potential of the series and allowed each of the characters, from Chuck to Casey (hell to Tang), the opportunity to shine. Definitely a step in the right direction and hopefully we'll see more episodes as tightly plotted and as thoughtfully written as this one.

What did you think of last night's episode? A huge leap for Chuck or more of the same? Curious to hear what you thought.

Next week on Chuck ("Chuck Versus the Truth"), Chuck finds himself falling for a new girl named Lou (guest star Rachel Bilson) who appears to be interested in the real him and they double-date with Ellie and Captain Awesome; Sarah wants to take her cover relationship with Chuck to the next level; a poison specialist attempts to uncover codes to nuclear facilities.

Finally, a new episode of guilty pleasure Beauty & the Geek. On tonight's episode ("Viva Mexico"), the teams travel to Mexico where they are tested in a challenge involving memory and the geeks square off against one another in a dance contest.

The CineManiac said…
I loved, LOVED Chuck last night. It brought some much needed backstory and I believe some much needed mythology to the show.
I guess a back nine pick up is now dependent on the Strike, but if the strike goes on and it can't be picked up what are the odds that it would return for a second season?
I really hope this series keeps going as it's right up there with Pushing Daises as my favorite of the new series.
11/06/2007

Anonymous said…
This was a great episode! Totally brought in a much needed back story.
Like you, I hope to see more episodes like this. I also loved the junior spies and how they all showed up to save the day.
Awesome episode.
11/06/2007

Carrie said…
Loved this episode! This show works when it grounds the goofy spy stuff with emotional resonance, and they pulled this off perfectly last night.

I was OK with Chuck looking the same in 1999 and 2003, as so many shows spend so much time trying to make flashback characters look different that they usually just end up looking ridiculous and distracting.

I hope the strike doesn't hurt this show's chances of getting a full season. It's one of my new favorites!
11/06/2007

Anonymous said…
Last night was the best episode of Chuck so far... even better than the pilot! Junior spies were super cool. Chuck was adorable, as always.... And Matt Bomer, as Bryce, was amazing. I wish he could become a recurring character!
11/06/2007

I would love it if Bryce wasn't really dead and popped back into the picture at some point...or at least in more flashbacks. I think his character really adds to the story.

Anonymous said…
this weeks Chuck was definately the best episode thus far. like you, i have this silly idea that Bryce is still alive or at least i'm hoping he is.
also, harry tang is such a genious character. his scenes are freakin hilarious
11/07/2007

Unknown said…
This was definitely a great episode. But.

1. Too much backstory. It seems that the shows that go to the trouble of giving us so much history merely get us invested in the characters in time for the show to be canceled or to start sucking. So, cut out the backstory and just write fun episodes.

2. The junior spies were stupid. Like they could ALL get there so fast, especially with a football game going on. And are we really supposed to believe the CIA hands automatic weapons to junior spies who (a) haven't been trained, and (b) aren't supposed to operate within the United States.