Reunited and It Feels So Good: The "Project Runway" Reunion 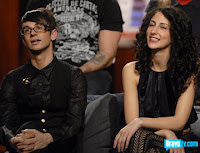 I have to say that I really quite enjoyed last night's reunion episode of Project Runway. While I am not usually a fan of the overly packaged clip-laden specials that Bravo typically airs (especially when irritating Andy Cohen presides over them), Runway usually does offer a classier affair and last night's installment was no exception.

It was fantastic to see the entire 15-member cast come together again one final time though I had to refresh my memory in order to remember some of them. (Simone, we hardly knew ye!) Still, it was a reunion filled with some interesting and hysterical asides (Michael Kors' uncharacteristic laughing jag during the WWE Diva challenge), predicable filler (a clip package featuring Ricky crying the entire time), and a collection of Christian's best "fierce" moments.

Worst Reunion Moment: Carmen telling Heidi Klum (Heidi Effing Klum!) that she had enough already from her when she made a comment about the menswear challenge, in which Carmen sent her model down the runway without a shirt. Oh, get some perspective, Carmen, and don't blame Heidi for your failure in that challenge and subsequent challenge, especially as all of the judges agreed it was the most difficult to date.

Best Reunion Moment: a toss up between Michael Kors' laughing fit, the clip package of the designers in their wrestler alter egos, and Chris March's maniacal laughter.

Designer Who I Would Have Liked to Hear More From: Kit, who seemed strangely quiet throughout the whole special. I think she's got enormous talent and I thought it was cool that she had inspired many young girls to become designers.

Designer Most in Need of Lightening Up: Victorya. What the hell was up with her somber attitude throughout the special? It was abundantly clear that she didn't want to be there, had pulled together her own runway show during Fashion Week, and seemed to resent several of the other contestants, the judges, and quite possibly the cameramen too.

Surprise Winner of the Fan Favorite: Christian. I thought for sure it was going to be Chris March, but I was completely wrong on that account. Tim says that Christian won by a landslide. Don't get me wrong: I'm rooting for the cubist-hairstyled wunderkind to win this thing but wasn't sure his sometimes abrasive personality would catch on with the audience at large. But the boy is fierce.

Most Missed Designer: Jack. I would have loved to have seen what he would have done in the final challenge and in his own runway show but it was good to see that he was okay after the terrifying health scare that forced him to pull out of the competition.

Best Wha Huh? Moment: A tie between Michael Knight (no, not that Michael Knight) handing Christian the giant check and then saying that he was releasing his first fragrance (where was the footage of his most recent fashion work?) and finding out that Jack Black watches Project Runway and apparently prefers Sweet P.

The ET Phone Home Award: Without a doubt it goes to the spit-marking, backwards-journaling, energy-imbuing Elisa. But you knew I was going to say that.

Best Lost in Translation Moment: Heidi's "who will eat the sausage?" exchange that was so blatantly hysterical. Her German-to-English expressions are just absolutely priceless.

All in all, a fun diversion before the main event: next week's season finale which features the final sartorial showdown between the remaining designers. Still, I am a little confused by the emphasis on whether Rami or Chris will get to show their work during Fashion Week, as we know that all four designers (plus also-ran Sweet P) got their own runway shows.

Danielle C.F. Maris said…
RE: Victorya: "...seemed to resent several of the other contestants, the judges, and quite possibly the cameramen too."

Hilarious! And completely true. I think she's really talented but so uptight. She and Carmen need to split a bottle of Valium.
2/21/2008

Anonymous said…
Surprisingly good episode. I'm glad that we not only learned more about the contestants but about the judges too.

I loved Heidi's sausage remark! That and the clip of Michael Kors' laughing attack were the best moments of the show.

I did feel bad that someone called Nina Garcia "Meanie Godzilla," though. Sure, she's tough, but I think she's an excellent judge with great taste and seems like a pretty cool person.

I'm also glad that we found out the mystery behind Michael Kors' wardrobe. And those pictures of him with the long flowing curls were priceless!
2/21/2008