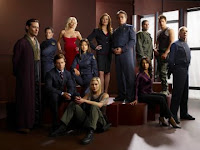 Wondering where the frak BSG is? Battlestar Galactica will return with the back half of Season Four, the series' final installment, on January 16th at 10 pm. (Entertainment Weekly's Ausiello Files)

NBC has given a put pilot commitment to Jason and the Argonauts, a green-screen drama based on the Greek myth about the quest for the golden fleece from writer/executive producers Josh and Jonas Pate (Surface) and Media Rights Capital. (NBC previously aired a mini based on the myth in 2000.) I'm not quite sure that they should have done so until after they see the numbers from the premiere of Crusoe later this week but there you go. The Peacock landed the project after a fierce bidding war, apparently with FOX. (In other news, MRC received an order for seven additional scripts for its animated ABC comedy The Goode Family and three additional scripts for Lifetime comedy Rita Rocks.) (Variety)

In other NBC news, My Own Worst Enemy didn't exactly take the ratings by storm. The Christian Slater-led drama opened in fifth place among the seven new dramas that launched on the broadcast networks this fall with a 3.0/8 in adults 18-49 and 7.27 million viewers overall, enough to put it in third place in the key demo behind football and CSI: Miami. The series premiere held onto 70 percent of the Heroes audience, the same retention figure as cancelled Studio 60 on the Sunset Strip. (Variety)

ABC has ordered four additional scripts of sophomore drama Eli Stone, which launched its second season last night. The order suggests that studio ABC Studios is happy with the creative direction of the drama. (Hollywood Reporter)

Amy Sedaris (The Closer) has signed a deal with 20th Century Fox Television to create, write, and star in an untitled single-camera comedy series project from Worldwide Pants. She'll co-write the script with writing partner Paul Dinello, who will direct should the project get ordered to pilot. (Hollywood Reporter)

Former Dawson's Creek star James Van Der Beek will guest star in a November episode of the CW's One Tree Hill. In a weird twist of fate, One Tree Hill films on the very same lot where Dawson's Creek was filmed. (Entertainment Weekly's Hollywood Insider)

ABC has given a put pilot commitment to single-camera comedy Made Over from writer/executive producer Caroline Williams (The Office, Miss/Guided) and Warner Bros. Television. Project follows a shallow LA-based comestics executive who "has a crisis of conscience and quits her job," in order to start a consulting firm with a younger woman with very different values than her own. (Hollywood Reporter)

D.L. Hughley will host a CNN series. Yes, you read that correctly. (Variety)

CBS has signed a deal with Tribeca Prods. to develop three pilots with a guarantee that one of the projects will be ordered to pilot. Under the guidance of Robert De Niro and Jane Rosenthal, Tribeca is developing its first project an untitled NYC-based one-hour drama to be written by William Monahan (The Departed). Details are sketchy at best but is said to play to Monahan's strengths. (Variety)

HBO Films president Colin Callender has left HBO after 21 years at the pay cabler; he'll launch his own entertainment and content company next year. (Variety)

Anna Paquin (True Blood) has been cast as the lead in CBS' telepic The Irene Sendler Story, from Hallmark Hall of Fame. (Hollywood Reporter)

Anonymous said…
It feels like light years since BSG has been on. I can't even remember where it left off! Looks like I've got some catching up to do before January.
10/15/2008