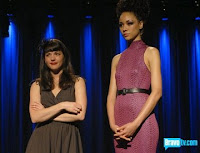 Grr. I was really hoping that Kenley would somehow manage to get herself ejected from the competition on Project Runway but this week managed to squeeze by, possibly ensuring a place for herself at Bryant Park's Fashion Week, despite an garishly ugly and scaly evening gown that looked like it was a cross between a fishmonger's scraps and Little Shop of Horrors's Audrey Jr. Ick.

This week's Project Runway ("Nature Calls") gave the designers a very interesting task: take inspiration from some floral life at the New York Botanical Garden and then translate that to an evening gown. We should have been wowed by what the designers produced--after all, they had two days and a budget of $250 at Mood--but I have to say that I wasn't really all that impressed by what any of them accomplished and all of them seemed to crumble under the pressure.

Kenley is now driving me to pull out my hair whenever she opens her mouth. (And not just because her nasally voice is now like nails on a chalkboard to me.) That she is completely lacking in self-awareness of any kind just makes it worse as she fails to understand why the other contestants can't stand her and don't want to be around her (and fail to name her as one of the two competitors they'd want to bring to Bryant Park). Her attitude towards Tim and the judges is also utterly vile, as she gets so defensive on the runway that she continually lashes out at the judges time and time again, cutting them off and cutting them down with sarcastic and arrogant remarks that don't win her any favors. It looked to me like Heidi wanted to strangle her last night when Kenley cut her off and said, "I wasn't going for elegant, Heidi" as though Heidi was some child who wandered in off the street and made a disrespectful comment about her hideous gown.

But I was pretty disappointed by the results of this challenge, which I thought could have really pushed the designers to create some outrageously decadent designs. After all, Christian probably could have pulled together an entire collection in two days or at the very least a showstopping evening gown that would have had the judges oohing and aahing. We didn't get any of that here and that I find worrisome so close to the finale.

I thought Jerell did a really good job with his dress but clearly could have used more time to get it right. It seemed rushed and I think a lot more attention could have been spent on the bustle and the bottom half of the dress. And I agree that the dress was either too low-cut or needed to be pulled up a few inches as his model Nicole was clearly slipping right out of it. I was worried about the maroon fabric Jerell chose but he definitely made it work here, though I don't think the maroon and the green were really needed and wished that he had just stuck to his purple jewel hues for this piece in order to make it look a little more cohesive.

I really liked Leanne's dress but, like Jerell, she definitely needed some more time to properly finish the garment and I don't really understand why she attached that bolt of blue fabric to the back like she did. The lavender was so pretty and lush on its own (and looked amazing on her model) that it detracted from the overall look and seemed really messy, as though she had run out of her original material. Still, the ruching and the bodice really made it stand out though it could have used an injection of fun.

Poor Korto went in the wrong direction, creating a tangerine garment that really didn't seem to embody her design ethos at all. Ultramodern in the very front and oddly dated on the sides and back, it was a mishmash of styles, textures, and fabrics and not her best work to date. I sort of got what she was going for but it really didn't come through here and I was extremely nervous that this would be the garment to send her home. Sigh.

And then there was Kenley. I really thought that this was the worst of the bunch and showed a distinct lack of taste and construction skills. Kenley took a shot of interlocking leaves and created a weird purple-scaly mermaid dress that was adorned at the bottom with actual purple fabric leaves. Or fins. Or flippers. I'm not sure what they were meant to be but it looked like a bruised reptilian design than had no real relationship other than color to the botanical theme or her inspiration photo. It was garish and looked costumey; the model could barely walk in the thing and there was nothing fashion-forward about it at all. It looked dated, cliche, and hideous. I was hoping that this monstrosity would get her the boot.

Instead, the judges decided not to eliminate anyone and sent all of them home to create collections, which would then be judged by Heidi, Michael, and Nina, with three of them moving on to Bryant Park. I do think that Jerell should have at least been guaranteed a slot after winning this challenge--which was meant to narrow the playing field to three competitors--but I suppose there is no immunity at this point and producers wanted to create as much drama as possible next week, with any one of them losing out at their shot at Bryant Park for failing to hit their mark.

As long as Kenley doesn't get there, I'll be very happy indeed.

Next week on Project Runway ("Finale, Part One"), Tim Gunn visits the designers at their homes and sees how far they've gotten on their individual collections; the quartet returns to Parsons for a final runway showdown and three move on to present at New York Fashion Week.

Susania said…
Kenley has a psychotic personality that slowly alienates people over time, which then allows her to pity herself for not having any friends and for having such a hard life. This is a cycle she can repeat endlessly (and probably has).
10/02/2008

Anonymous said…
In defense of Kenley (I know, why bother), I really didn't understand why Korto went after her after they were sent backstage. After all, all Kenley did was choose two other designers, exactly as the other three did. But maybe there was something that edited out. Still, seemed a little hypocritical on Korto's side.

Also, in defense of Kenley (I don't know what's gotten into me this morning)....while she is a self-involved, annoying, nasally-voiced, semi-talented, one-note wench, the picked-on girl in me always gets VERY uncomfortable when a group of people so visibly gangs up on someone. The alienation, deliberate shunning (not sharing the tulle), etc hits me in that 10-year old girl spot, and I don't like to see anyone go through it. Even Kenley. The other designers could have been the better people, and just went on with their business, but they showed their petty sides, too.

Asta said…
Because of the timing of fashion week and taping of the show the final six designers all made it to Bryant Park. I won't go into details about their collections, but I knew Suede and Joe were not going to be in the final three given what they produced. As for the rest, I'd eliminate Kenley in part because of her attitude and, in part, because I felt her collection was what we had come to expect from her. Hopefully, the judges feel the same.
10/02/2008

Anonymous said…
I was really disappointed with all of the designers. This was their final opportunity to impress the judges before Bryant Park and all of the gowns were underwhelming. I definitely expected more (at least from Jerell, Leanne, and Korto)! Hopefully they'll step it up for their runway shows.
10/02/2008