"Death Doesn't Change Us More Than Life": An Advance Review of PBS' "The Old Curiosity Shop" 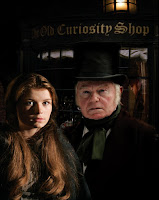 “Nobody ever did, or ever will, escape the consequences of his choices.” - Alfred Montapert

In this case, it's not just our own choices that we need fear the consequences from but those of others as well.

In Masterpiece Classic's The Old Curiosity Shop, an adaptation of Charles Dickens' novel that aired in the UK on ITV in 2007, a young girl and her gambling addict grandfather must flee from the titular shop after they are ruined from his debts and are relentlessly pursued by one of Dickens' most loathsome and terrifying villains, the evil and sadistic (not to mention grotesque) Daniel Quilp.

The girl in question is The Old Curiosity Shop's eternally patient and tragic Little Nell (Becoming Jane's Sophie Vavasseur), a candidate for sainthood if there ever was one who bears the indignities of her situation with an almost ethereal distance from the grubbiness of the situation at hand. Certainly not helping matters is her self-serving grandfather (Diamonds' Sir Derek Jacobi), a degenerate gambler who is burning through their meager savings at an alarming rate and who puts Nell's entire future in jeopardy by borrowing money from the hideous and inhuman Daniel Quilp (Frost/Nixon's Toby Jones).

To say that Quilp is a monster is an understatement; e ranks as one of the most loathsome of Dickens' rogues gallery. Jones imbues Quilp with all of the malice and depravity one could expect from this awful human being: he terrorizes his poor young wife Betsey (The Outsiders' Anna Madeley) and intends to send her to an early grave (hell, he makes clear his intent to woo 14-year-old Little Nell when she comes of age), conspires to jail an innocent boy for theft in an effort to keep him from assisting a mystery man also looking for Nell and her grandfather.

But one wishes that The Old Curiosity Shop, written by Martyn Hesford and directed by Brian Percival, had been significantly longer than its meager 100-minute running time. Forced to cram in the story's most significant plot points into this one-of format, Hesford has missed much of the plot's nuance and the relationship between Nell and her grandfather remains sadly one note. We glimpse Nell's devotion to her grandfather in spite of his selfishness but we never actually see any tenderness or devotion of the man towards his granddaughter. Likewise, the plot speeds along at such an alarming rate that the many high-profile actors performing the supporting roles become little more than flashes of color, what one might glimpse as they soar through the countryside on a speeding carriage.

The actors who round out the cast are The Office's Martin Freeman, Atonement's Gina McKee, My Family's Zoe Wanamaker, Blackpool's Bryan Dick, Skins' Josie Lawrence, and Lewis' Geoff Breton. All manage to provide memorable performances in their brief span on the screen but the shortness of the piece doesn't allow for much use of Dickens' trademark labyrinthine plots, where multiple characters' storylines intersect with delicious coincidence.

All in all, The Old Curiosity Shop is a serviceable adaptation of one of Dickens' lesser known works but coming on the heels of the far superior adaptation of Little Dorrit as it does, its faults are glaringly obvious. Still, devotees of Dickens would be wise to tune in if only to see Jones' fascinating portrayal of Quilp... and would be wise to try and put the memory of his performance out of their heads before bedtime.

Bella Spruce said…
After seeing the superlative Little Dorrit, I was really let down by this. I think, as you said, it could have been better in longer form but, as it was, the characters seemed paper thin. Nell seemed to have no personality whatsoever and her grandfather was just annoying. I found it hard to sympathize with either of them! I am usually a big fan of Derek Jacobi but, although this production had many excellent actors, few of them actually got to shine.
5/04/2009