Tycoons and Tantrums: An Advance Review of BBC America's "The Apprentice UK" 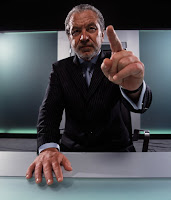 I had long since given up watching the US version of The Apprentice, which had come to feature more finger-waggling and The Donald's bizarro hairstyle than I really liked, so I was curious to see just what the Brits had managed to accomplish with Mark Burnett's reality format.

I have to say that I was pleasantly surprised to discover that The Apprentice UK is a more slick and enjoyable format than its Yankee namesake, offering an overall more taut and polished performance than the ghastly trainwreck (ahem, Celebrity Apprentice) that the US original has become.

Adding to this rich patina is the program's host, self-made billionaire Sir Alan Sugar who reminds us repeatedly that he (A) doesn't suffer fools gladly and (B) should never be underestimated. He's the perfect Machiavellian villain for the piece and lords over the contestants with the sort of bearing typically reserved for feudal landowners or warlords. One can't shake the feeling that he's volatile, unpredictable, and dangerous.

Sir Alan is assisted in keeping an eye on the fourteen contestants (more on them in a bit) by his trusted advisers, Margaret Mountford and Nick Hewer. Mountford and Hewer are Sir Alan's eyes and ears in the field and they keep a watchful eye over the assembled wannabe apprentices, each vying for the opportunity to gain the sage advise (and a hefty paycheck) from Sir Alan. So far, Mountford and Hewer are far more reserved than their American counterparts and they remain professionally detached from the teams they are supervising. No showboating here.

The contestants themselves are the sort of mix of reality contestants that one would expect to find in a financial competition: young upstarts, egomaniacs, icy power brokers, and the truly bizarre. The contestants live together in a posh flat, though the men and women are segregated into gender-based teams for the first two challenges, which involve selling flowers and creating a pitching a new toy, after which the teams are reshuffled.

So far, it's too early to tell who will emerge the strongest but the first two episodes already show friction forming between the fourteen competitors, especially between headstrong sales manager Saira and Adele... and between Saira and Adenike... and between Saira and Miranda. I think you get my drift: loads of leaders and not too many followers here, a trend that is especially felt in the second episode when project manager Lindsay quickly makes some enemies by not being proactive enough when it comes to selecting a product to pitch. And, as we all know from watching the original format, no one likes an indecisive leader. The men's team has its own troubles as well, most notably in the form of mature student Matthew, a former stockbroker and one-time Conservative Party parliamentary candidate.

All in all, Mark Burnett's The Apprentice UK is a well-crafted reality series that furthers the franchise and gives it its own identity, ably aided by the superb Sir Alan Sugar, a sharp-clawed tiger in a Saville Row suit. And while it seems somewhat familiar, thanks to the overplayed US original series, the British accent and slick suiting give it the sheen of something new and exciting.

NicholasJ said…
I am SO over the US Apprentice but I have to say that your review has piqued my interest about the UK one. The US Apprentice has become nothing more than a joke but it sounds like the UK version is more like the original. Plus, Alan Sugar seems more scary that The Donald!
5/05/2009