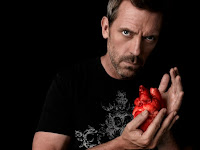 Tony Award-winning actor Lin-Manuel Miranda (In the Heights) will appear in at least two episodes of FOX's House next season, where he will play the roommate of Gregory House (Hugh Laurie) at the psychiatric facility where House is currently living. Miranda's first appearance is slated for House's sixth season premiere, which kicks off this fall. (Entertainment Weekly's Ausiello Files)

Zoe Green (Book of Shadows) has been hired to write the script for mini-series The Diamond Age, an adaptation of Neal Stephenson's 1995 novel "The Diamond Age: Or a Young Lady's Illustrated Primer," for Sci Fi and executive producers George Clooney and Grant Heslov. Mini-series tells the story about a father and daughter who live in a futuristic society that stifles all creativity; the man creates an interactive book for his daughter, who uses it "as a guide through a surreal alternative world." (Variety)

NBC's Heroes has landed two additional actors, with Star Wars: Episode I -- The Phantom Menace's Ray Park to join the cast of the drama series in a multiple-episode story arc playing one of the characters at the four season's carnival. Additionally, Deanne Bray (The L Word) will play a hearing-impaired love interest for one of the main characters. (Entertainment Weekly's Ausiello Files)

FOX has ordered a pilot for marriage-themed reality series I Married A Stranger from production company A. Smith a Co. Each week, a marriage-minded woman in her late 30s has her friends and family wheedle down five prospective grooms until one is left; as each man is eliminated, the bride-to-be gets a look at who she won't be marrying... and will finally get to meet her betrothed, right before the on-air wedding ceremony. Project will be executive produced by Arthur Smith, Kent Weed, and Scott Jeffress. (Variety)

BBC America has acquired rights to long-running UK talkshow Friday Night with Jonathan Ross, which it will launch on June 12th at 8 pm ET/PT. The digital cabler plans to pick up airing the series with the 18th episode of the current season, which features actors Dustin Hoffman and Hugh Laurie and British band Gossip. Future installments will feature such luminaries as Ben Stiller, Eminem, Hugh Jackman, William Shatner, Glenn Close, and Lionel Richie. “The wit and wry humor of Jonathan Ross is the perfect addition to the BBC America schedule," said Richard De Croce, SVP Programming for BBC America. "His interviews with A list guests – from Tom Hanks to John Travolta to Nicole Kidman – are always candid and frequently unpredictable. Best of all he fosters an atmosphere which allows guests to relax, open up and allow the viewers in.” (via press release)

The Television Critics Association announced the nominees for its annual TCA Awards, with such The Shield, Battlestar Galactica, Lost, Mad Men, and Saturday Night Live vying for program of the year while Fringe, The Mentalist, No. 1 Ladies' Detective Agency, and United States of Tara are competing for best new program; comedies 30 Rock, The Big Bang Theory, The Daily Show, How I Met Your Mother, and The Office are in the running for outstanding achievement in comedy while Breaking Bad, Friday Night Lights, Lost, Mad Men, and The Shield are competing for outstanding achievement in drama. (Hollywood Reporter)

A&E's Abbe Raven will oversee the new joint venture that is being formed between Disney, Hearst Corporation, and NBC Universal which will act as an umbrella for their cable channels Lifetime, A&E, and History. New company will encompass 10 channels in 145 countries and 15 websites. Lifetime's Andrea Wong will now report to Raven, according to reports, while other management restructuring has yet to be decided. (Variety)

ABC has opted to shift the second season premiere of I Survived a Japanese Game Show up by several weeks, from July 8th to Wednesday, June 17th at 9 pm ET/PT, while the network will shift comedies Surviving Suburbia and The Goode Family to Friday nights beginning June 12th. (Futon Critic)

BET has picked up talk show The Wendy Williams Show, which it will launch on July 13th in syndication and on BET, which will be running the series day-and-date with the syndicated telecasts. (Variety)

Sony Pictures Television has signed a new two-year overall deal with writer/producer team Cathy Yuspa and Josh Goldsmith, who created 'Til Death. Under terms of the deal, they will develop new projects for the studio while receiving executive producer credits on the FOX series they created. (Hollywood Reporter)

Former NBC executive Jamila Hunter has landed a position as head of programming at OWN: The Oprah Winfrey Network. She will replace Robin Schwartz, who left the channel earlier this year. (Variety)

AskRachel said…
TCA - How could you leave Big Love out of the best drama category? It was one of the best seasons of drama ever on TV!
6/05/2009

BraunMan said…
Are there any actors left who haven't starred or guest starred on Heroes? It's become the Will & Grace of dramas.
6/05/2009