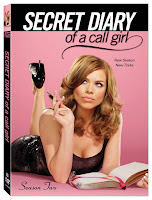 Fans of Showtime's imported British drama series Secret Diary of a Call Girl might want to check out the second season on DVD, which is being released today.

After all, Season Two of Secret Diary of a Call Girl finds Hannah, a.k.a. high class call girl Belle (Doctor Who's Billie Piper), branching out onto her own while juggling all matter of problems, not least of which is her confused relationship with best friend Ben (Iddo Goldberg), a flighty protege named Bambi (The Beautiful Life's Ashley Madekwe), and the prospect of genuine happiness with boyfriend Alex (Dead Like Me's Callum Blue).

The only problem is that Hannah hasn't quite gotten around to telling Alex, a dashing doctor recently relocated to London, what she does for a living. (Or who she does, really.) Season Two of the witty and provocative series finds Hannah living a double-life once again, lying to Alex even as she falls for him and trying to work up the courage to reveal to him who she really is.

While Season One established Hannah/Belle and the nighttime world she inhabits, Season Two of the Lucy Prebble-created drama delves deeper into Hannah's psyche, exploring whether this educated and ambitious young woman can hold down a so-called "normal job" or if her alter ego "Belle" and her prostitution really do not only define her but satisfy her. The season also features one of the most horrifically intense and gut-wrenching scenes on the series to date--I won't reveal what it is--which packs an emotional wallop and threatens to derail Hannah and Alex's relationship altogether.

Despite being deep into pregnancy, Piper once again shines as Hannah/Belle, offering a performances that's equal parts sly candor and sleek, seductive charm. Despite her shortcomings, you really do root for Hannah to find happiness, security, and love even as she makes a number of mistakes in personal and professional life. Adding the pressure this season is the aforementioned Bambi, who wants to emulate Hannah's success as a high-end call girl even as she can't quite wipe away the Cockney accent or brashness that define her. Madewke is absolutely fantastic as the well-intentioned but oblivious Bambi and the duo slip into a comfortable love-hate relationship that eventually resembles something akin to friendship.

The two-disc DVD box set includes all eight episodes from Season Two of Secret Diary of a Call Girl, which aired Stateside earlier this year, as well as some special features including a "Billie on Belle" interview with Billie Piper and webisodes.

All in all, Season Two of Secret Diary of a Call Girl is a must have for fans of dark comedy, sly relationship drama, and British humor. Despite some oddly sagging installments in the middle of the eight-episode season, Piper's winning performance alone makes it the worth the price of admission.

Secret Diary of a Call Girl: Season Two is available today on DVD with a suggested retail price of $29.98. Or pick it up in the Televisionary store for just $19.49.

Danielle C.F. Maris said…
This is a fun, fizzy show and I particularly enjoyed the second season as both Alex and Bambi are great characters and stir up Hannah's life in an interesting way.
6/30/2009