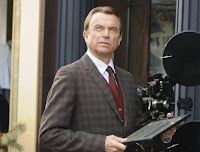 Did you tune in to last night's series premiere of ABC's new mystery-horror-supernatural-drama Happy Town?

If so, I'm curious to see just what you thought of the first episode, which was written by Scott Rosenbaum, Andre Nemec, and Josh Applebaum, and which introduced the sleepy and seemingly idyllic town of Haplin.

You can read my advance review from last May of the original 90-minute pilot here, but now that the first episode has aired, I'd love to hear what you thought of the series opener.

Were you intrigued by the series' eerie vibe? Or put off by the convoluted plot and the kitchen sink narrative, which piled high every single supernatural trope previously used on Twin Peaks or in the works of Stephen King? Were you charmed by the characters or irritated by them? Like the nickname "Root Beer" or put off by it? Did you think that Amy Acker was criminally undervalued?

And, most importantly, will you tune in again next week?

Amanda from Georgia said…
I'm not getting much feedback about this show. No one seems to have watched it. But I did. First thought: silly. Second thought: I'm intrigued. The last few minutes really hooked me in and I will watch next week knowing that it's silly and way overstuffed.

It sort of had a vibe that reminded me of that show with Lee Pace, Chi McBride, and the Pie Store. Why I can't remember the name of that is beyond me.
4/29/2010

Mimi C said…
Amanda the show you can't remember is Pushing Dasies. I loved that show and did not get the same vibe as Happy Town. Frankly I was bored with the show until the very end. I'll give it another chance but I don't hold out much hope that I'll be a regular viewer.
4/29/2010

Anonymous said…
@amanda: The difference between this and Pushing Daisies is that PD had wit, smarts, and heart. This was just plain bad. Won't be watching again.
4/29/2010

Bella Spruce said…
I didn't see any similarities to Pushing Daisies...or Twin Peaks, for that matter (which they were trying so desperately to emulate). Amy Acker deserves better material for sure!
4/29/2010

Amanda from Georgia said…
Yes, Pushing Daisies. You're all very right that Pushing Daisies had more heart and wits. The last few minutes did hook me in with Happy Town, but I agree, I was terrible.
4/29/2010

shara says said…
I didn't think it was good. I didn't hate it, but it was pretty badly written. It seemed like it was trying to accomplish too much at once, introduce too many characters at once, and trying to sound really witty without actually achieving it. I'll give it a few more weeks because I'm an Amy Acker fan.
4/29/2010

kenshane said…
I liked Happy Town. I was hoping for a quirky, small town crime drama like my beloved Picket Fences, and I got some of that. There were also the obvious influences of Twin Peaks, Northern Exposure, and Pushing Daisies, all shows that I also enjoyed.

Yes, I think they tried to cram too much into the first episode, and some of it was pretty hokey. But I'll be back next week.
4/29/2010

Page48 said…
The Pilot was boring as hell, so I shouldn't be surprised if it sticks around for 7 seasons.

Amy Acker would be a lot better off drinking Seabreezes with Lorne at the Hyperion. So would I, for that matter.
4/29/2010

Kyle said…
It was terrible. In every way. Bad script, characters, production, etc.

HT can't hold a cherry pie and coffee to the brilliantly original and unorthodox Lynch and Twin Peaks. It's insulting to any discerning viewer to even mention the two as in any sense equals.

Frankly, I only tuned in to see Acker, who I agree is once again wasted in another forgettable role in a marginal TV series doomed to be short lived. She was much better in Hard Target earlier, it self no great part, but Shakespearean compared to this.

But whose fault is that? Acker and her representation need to seriously reconsider how they are managing her career. Yes, Acker, you can have a successful marriage, family AND better roles than this.

Wean yourself from the Whedon's, Nemec's, et. al's. and stick your neck out, take a chance on something truly challenging to your considerable talents.

As for Nemec, Applebaum, et. al. - why does ABC keep hiring these guys? After the disasters of the last season of Alias and the arch, awful October Road, why do they keep getting work?