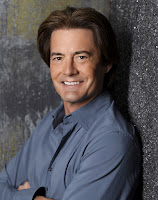 Entertainment Weekly's Michael Ausiello is reporting that Desperate Housewives' Kyle MacLachlan has been cast in at least two episodes of CBS' How I Met Your Mother, where he will play the ex-husband of Jennifer Morrison's Zoey. His first appearance is slated to air in early November. (Entertainment Weekly's Ausiello Files)

Looks like Comic-Con is staying put in San Diego. The organizers of the annual fan convention have reached an agreement with the city of San Diego's convention center to keep SDCC stationed there "for the foreseeable future." That contract was set to expire in 2012 and other cities--including Los Angeles and Anaheim--were said to be keen to snag the pop culture event, which has become one of the year's largest. (Variety)

TVGuide.com's Joyce Eng has an interview with Blue Bloods star Will Estes, in which he discusses the secret society twist revealed in the series pilot. It reminds me of Michael Corleone in The Godfather, if I may be so brave as to draw that comparison," Estes told Eng. "I definitely wasn't expecting it, but it's so intriguing and a fantastic thing for the audience to watch." (TVGuide.com)

Entertainment Weekly's Michael Ausiello is reporting that Collette Wolfe (100 Questions) has been cast in a multiple-episode story arc on ABC's Cougar Town, where she will play "a grad student who gets romantically involved with college freshman Travis (Dan Byrd)." Her first appearance is slated to air in November. (Entertainment Weekly's Ausiello Files)

Tony DiSanto, MTV's programming president, will leave the cabler after 20 years and segue, along with Liz Gateley, into a production company named DiGa that's said to be backed by Ben Silverman's Electus. David Janollari is expected to replace DiSanto at the network. (Hollywood Reporter, Variety)

Paris Hilton will star in an Oxygen docuseries that will follow the socialite, three of her friends, and her mother Kathy Hilton. project, from A. Smith and Co., will be executive produced by Arthur Smith, Kent Weed, Paris Hilton, Rick Hilton, and Jamie Freed. (Variety)

Looks like the producers of ABC's The Whole Truth are staging a bit of an ER reunion as Maura Tierney's former ER castmate Parminder Nagra will guest star on the ABC legal procedural as Pilar Shirazeem, described as "a beauty who comes to her best pal's defense when she is charged with killing her husband." [Editor: so it's Tierney's character who is charged? I'm confused by Keck's description.] Nagra is set to appear in the eighth episode. (TV Guide Magazine)

ABC has given a script order (plus penalty) to an untitled one-hour dramedy (a.k.a. Nannyland) from executive producers Jennifer Lopez, Simon Fields, and Alexa Junge about "three branches of an extended Los Angeles family -- as told through the eyes of their three Latina nannies." Project hails from Sony Pictures Television. (Variety)

ABC Family is said to be close to giving a back order of 10-12 episodes to comedy Melissa & Joey. (Deadline)

Lone Star creator Kyle Killen has expressed his disappointment at the cancellation of his FOX drama series at his personal blog in a post entitled "Lone Star Loves You, Even From The Grave." "I'm incredibly grateful that we were given an opportunity to try a premise that, as the numbers seem to confirm, was perhaps a little riskier than I estimated," wrote Killen. "We made a good show. Not Shakespeare. Not MASH. But something I was proud of." (The Letter Eleven)

BSkyB is close to a deal with Lionsgate Television to acquire life-of-series rights to AMC's Mad Men, which currently airs on the Beeb in the UK, which is facing a 25 percent slash to its acquisitions budget. The deal is said to be in the area of $5-10 million for the rights. (Hollywood Reporter)

The UK satcaster is also set to launch Sky Atlantic HD, a new dedicated channel that will serve as the home for the HBO content it has recently acquired, from Boardwalk Empire to The Sopranos. (Broadcast)

In other UK news, Sherlock lead Benedict Cumberbatch will be the first guest host for BBC One's Have I Got News for You, which returns on October 14th for a ten-week run. "I'm very excited and honoured and, like a moth to the flame, I am terrified but cannot resist," said Cumberbatch in a statement. "I have watched the show since its inception, and my family and I used to make it a routine TV date to relish. How could I resist the chance for the audience to witness my being shot down in flames by the wit of Merton and Hislop?" (BBC)

Deadline's Nellie Andreeva is reporting that Lifetime has given a pilot order to drama Meet Jane, from writer Andi Bushell and executive producer Mark Pedowitz. Project, from Warner Horizon, revolves around "an unhappily married mother of two daughters in the Washington, DC area is suddenly re-energized and empowered when the FBI enlists her to spy on her husband, a computer technician the government suspects is selling top-secret information to Russia." (Deadline)