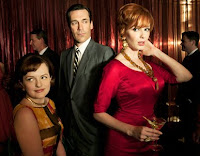 Over at The Daily Beast, I talk to Mad Men creator/executive producer Matthew Weiner about Don's journey, the real-life Miss Blankenship, Joan and Roger, Sally Draper, and more in a piece entitled "Mad Men's Volatile Season", which just went live at the site.