When You Have Eliminated the Impossible: An Advance Review of Sherlock on Masterpiece 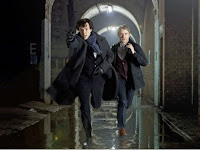 Mention Sherlock Holmes and there are a great many things that immediately come to mind for most: that dearstalker hat (which the great detective never actually wore) and a magnifying glass, 221B Baker Street, "Elementary, my dear Watson" (a conflation of two separate quotes, actually), and that damned hound running around on the moors.

Of the seemingly infinite literary characters ever created, the human imagination has latched onto Sherlock Holmes and John Watson in a way that very few other creations have. Scores of adaptations of Sir Arthur Conan Doyle's consulting detective have been launched in the years since Holmes was first created. We've see young Sherlock, Nazi-fighting Sherlock, and bare-knuckle brawler Sherlock, courtesy of Guy Ritchie.

We also now have a truly modern-day Sherlock Holmes (and I'm not counting House's Gregory House here, though the comparison is apt and the homage intentional) in Steven Moffat and Mark Gatiss' sophisticated and stellar Sherlock, which premieres Stateside on Sunday evening on PBS' Masterpiece Mystery.

With the simply titled Sherlock, Moffat and Gatiss bring the consulting detective and his companion into the 21st century, to a London that's just as fast-paced and desperate as its Victorian counterpart and just as hung up on technology. But the magnifying glasses and Inverness capes have given way to iPhones and stylishly modern tailoring, text messaging and high-tech forensics labs.

The series, containing three feature-length episodes, stars Benedict Cumberbatch (The Last Enemy) and Martin Freeman (The Office) as Holmes and Watson and each is perfectly cast here. Finding actors to bring a famous partnership such as this to life is a delicate thing but together Cumberbatch and Freeman are so supremely balanced, so ideally matched, that it seems as though each was born to play the role.

Cumberbatch's take on Holmes is one of supreme arrogance bordering on hubris; he's so misanthropic, so utterly detached from the rigors of the real world that his interpersonal skills are appalling. Witnesses, victims, police officers are all mere ants under the shoes of this intellectual Goliath, who has sublimated his emotions to the point where his every interaction is based purely on analysis, with no consideration for the feelings or secrets or others. Every encounter is a chance to score another victory for his unrivaled intellect, to deconstruct the world to its bare bones, seeing connections and implications in the simplest of details. A wedding band's condition becomes proof positive of the strength of the marriage, a coat indicative of where the wearer has been and when. He's a loner in a long coat, a scornful curmudgeon who is so very bored with the antics of the stupid and sloppy. What Holmes wants is a worthy opponent.

For his part, Freeman's Watson isn't the rotund, clumsy sidekick that many might expect. Freeman infuses the former army doctor--recently returned from Afghanistan--with a vulnerability and humor but also a steely resolve. He's handy with a loaded gun and, unlike Holmes, geography. If Holmes sees the worst of man, Watson might represent the very best that the species has to offer: he's steadfast, loyal, and even-tempered. Here, he's once again cast in the role of chronicler, providing the narrative spine to Holmes adventure. Given that this is 2010, it's only fitting that he's a blogger, albeit a reluctant one, the blogging part of his therapy after he was injured in the war.

As in the original novels, he'll also cross paths with the ladies, the fair sex being, according to Holmes, Watson's "department." So too is Freeman's Watson no monk, as much as Sherlock would prefer that he tamp down his sexual needs and lead an ascetic life like him. But there's also an intriguing sexual tension between Sherlock and Watson and a continual recurring thread in which everyone they encounter naturally assume the two men--roommates and partners--to be lovers.

It's a modern view that's not played for belly laughs but rather an indication of the times we live in. And, in the eyes of Sherlock's observers, it might make the great detective appear just a bit more human. Holmes, after all, doesn't have a lot of friends or even sympathizers, though he has formed a working relationship with Inspector Lestrade (Rupert Graves), one of the few coppers who sees Holmes' deductive methods for what they are: the work of a genius.

In the hands of Moffat and Gatiss and directors Paul McGuigan and Euros Lyn, Sherlock's world leaps off of the screen in dramatic fashion. Text messages appear on-screen as thought bubbles in a comic strip, a great chase sequence is brought to life using maps, smash cuts, and slick cinematography. The effect manages to take us inside Sherlock's mind, to see the way that his brain processes data, and to be a part of his deductive reasoning. While the solutions are concealed from the audience until Holmes chooses to speak them aloud, the methodology is brought to live with a clarity that's not been seen before in other adaptations. His genius--and perhaps madness--made so abundantly vivid and clear.

As for the mysteries themselves, they are top-notch. Moffat's "A Study in Pink" and Gatiss' "The Great Game" (the third and final installment) are masterworks of suspense and gripping mystery. While the second episode, "The Blind Banker"--based on "The Dancing Men"--is still better than quite a lot of television mysteries, it fails to match the superb quality of the first and third outings, which introduce Holmes' world to the audience and, in the case of "The Great Game," leave us on a tantalizing cliffhanger until the second season of Sherlock, which will head to BBC One in Fall 2011.

Along the way, the creators of Sherlock layer in some of the most memorable things about the Holmes canon: Mrs. Hudson, Moriarty, the bullet-laden smiley face, and more. I don't want to give away too much about these three lusciously layered mysteries because they're really best experienced first-hand when your mind can attempt to be half as sharp as Sherlock Holmes'. (And, yes, that is Mark Gatiss himself as, well, that would be telling.)

But it goes without saying that behind the door of 221B Baker Street lies this irresistible gem of a mystery series, an intelligent, humorous, and incisive drama for the ages. It's far from elementary, really.

The Flaming Nose TV Blog said…
Wonderful preview for this series which sounds incredible! Can't wait to see it and thanks for bringing it to our attention. Somehow PBS often seems to get left out of the buzz these days, and it's a pity! This series could bring lots of viewers, let's hope!
10/21/2010

Hazel Shade said…
Any idea on the status of the second season, now that Martin Freeman is confirmed as Bilbo Baggins in the Hobbit? I read he'd had to pass on continuing the Watson role...
10/21/2010

Mike said…
But he DID wear a deerstalker cap, at least in the Sidney Paget illustration accompanying the story, Silver Blaze.
10/21/2010

tati said…
I've already watched these episodes and, as much as I loved Brett and even Rathbone (and despised Downey, Jr.), I found this adaptation to be very very good.

It's fairly fast-paced, at times, and you may feel like you've missed something (thankfully, one can DVR and go back!)

This series brings a different dimension to the characters by setting them in the current time. I'm delighted they are coming back for season two.
10/21/2010

riverwillow said…
Hazel Shades - he's committed to the second series of Sherlock and I understand that everyone is trying to work out a schedule so that he can work on both, but allegedly he's already passed on Bilbo once because the schedule conflicted with the filming for Series 2.

You lucky people getting to see this for the first time, fantastic series which really deserved all the critical praise heaped on it by the UK critics.
10/21/2010

Anonymous said…
Wonderful, well-written review. You have a way with words and I'm sure it's not because this series is so spectacular, biasing my opinion!
10/21/2010

eAi said…
It really is a great series, though as Jace says, the second episode is fairly weak. It wouldn't terribly matter if you only saw the first and third, very little of the overal story arc happens in the second episode.
10/21/2010