NBC Picks Up Chuck for 24-Episode Full Season (And, yes, Picks Up Chase Too) 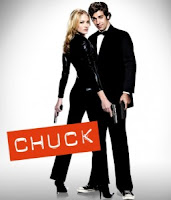 No couch-lock here: NBC has picked up action-comedy Chuck for a full season.

Yes, it's official: the Peacock has indicated that Chuck's current fourth season will get its back nine episodes plus an additional two, bringing this season's total to 24 installments. The series had initially been renewed this season for just 13 episodes.

The news comes significantly earlier than last season, when the show's writers had completed a 13-episode arc (it launched in January rather than September) before receiving word of a back-nine pickup, leading to a mini-season in which Chuck and Sarah became a full-blown couple.

“Chase has introduced an appealing new star to television audiences in Kelli Giddish and we think it has potential to grow,” said Angela Bromstad, President, Primetime Entertainment, NBC and Universal Media Studios, in a statement. “We also are glad that Chuck will be with us for a full season delivering its loyal, passionate audience.” [Editor: Bromstad seems to have forgotten about Past Life, clearly.]

So, Chuck fans: are you excited about the full season? And that the writers will be able to plan accordingly this time? Head to the comments section to discuss.

NBC ORDERS FULL-SEASON PICKUPS FOR NEW DRAMA ‘CHASE’ AND FOR RETURNING ‘CHUCK’
UNIVERSAL CITY, Calif. – October 19, 2010 – NBC has given full-season pickups to the new high-octane drama “Chase” and the returning action-comedy “Chuck” for 2010-11. The announcement was made by Angela Bromstad, President, Primetime Entertainment, NBC and Universal Media Studios.

“‘Chase’ has introduced an appealing new star to television audiences in Kelli Giddish and we think it has potential to grow,” said Bromstad. “We also are glad that ‘Chuck’ will be with us for a full season delivering its loyal, passionate audience.”

Through October 18, “Chuck” has averaged a 2.2 rating, 6 share in adults 18-49 and 5.9 million viewers overall in "most current" averages from Nielsen Media Research. “Chuck” is heavily time-shifted, adding 29 percent to its "live plus same day" 18-49 rating when Nielsen issued "live plus seven day" results for the opening two weeks of the season (to a 2.56 rating from a 1.99).”

“Chase” is produced by Bonanza Productions Inc. in association with Jerry Bruckheimer Television and Warner Bros. Television. Bruckheimer, Jonathan Littman (“CSI” franchise, “The Amazing Race,” "Cold Case”) and Johnson are as executive producers, while KristieAnne Reed is the co-executive producer.

“Chuck” (Mondays, 8-9 p.m. ET) stars Zachary Levi ("Alvin and the Chipmunks: The Squeakquel") as Chuck Bartowksi, a regular guy who also happens to be the government’s most vital secret agent. The cast also includes Adam Baldwin ("My Bodyguard") as Colonel John Casey and Yvonne Strahovski (the upcoming "The Killer Elite") as partner Sarah Walker. Also starring are: Joshua Gomez ("Without a Trace"), Sarah Lancaster ("What About Brian?"), Ryan McPartlin ("Living with Fran"), Mark Christopher Lawrence ("The Pursuit of Happyness"), Vik Sahay ("Time Bomb"), Scott Krinsky ("The O.C.") and Bonita Friedericy ("The West Wing").

Anonymous said…
SO EXCITED! chuck definitely deserves the full season. i am really looking forward to to what the writers will come up with in the back 11! and i hope theres an episode about sarah's past!
happy chuck day everyone!!!!! :)
10/19/2010

Samantha said…
Great news! Especially after the episode last night, which was my favorite so far this season. With all the sub-par new fall shows, it's good that Chuck is still great and that NBC is sticking with it too.
10/19/2010

JD said…
WOW! Fantastic news...not only the back-9, but an additional 2 episodes to round out Season 4! Congratulations to the cast and crew of "Chuck"...it's awesome that your dedication and love for your show has been rewarded!
10/19/2010