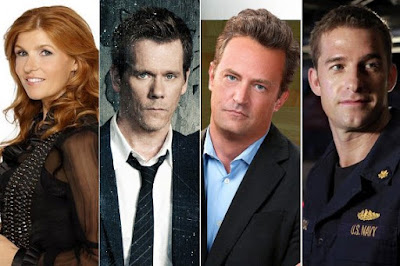 Over at The Daily Beast, we're keeping you up-to-date with all of the news, renewals, cancellations, and series orders coming out of this week's broadcast network upfronts.

You can read our Network Scorecard, which keeps track of all of the renewals and cancelations as well as reactions to the scheduling changes and check out video promos for all of the networks' new shows. And you can read detailed descriptions--as well as insider information--about all of the new series heading to your television in the fall and spring.

Jace Lacob and Maria Elena Fernandez take a look at what’s coming up and what’s coming back on TV this fall as television's network upfronts week comes to a close. The CW moved Supernatural to Wednesdays, ordered five new shows, renewed Hart of Dixie, and canceled Secret Circle and Ringer. CBS moved Two and a Half Men to Thursdays and The Mentalist to Sundays, while The Good Wife is staying put. ABC renewed Revenge (moving it to Sundays at 9 p.m.), Modern Family, Grey's Anatomy, Suburgatory, and several others. Fox renewed Touch (and it moved it to Fridays), canceled Alcatraz, moved Glee to Thursdays, and ordered Kevin Williamson's The Following and several comedies, including one from The Office's Mindy Kaling. NBC renewed Community (which moves to Friday this fall), Parks and Recreation, Parenthood, Law & Order: Special Victims Unit, and 30 Rock, and ordered 10 new shows, including a comedy with Matthew Perry, serial killer drama Hannibal, the Dick Wolf-produced Chicago Fire, and J.J. Abrams action drama Revolution. Read our analysis of all of the networks' 37 new series and counting!