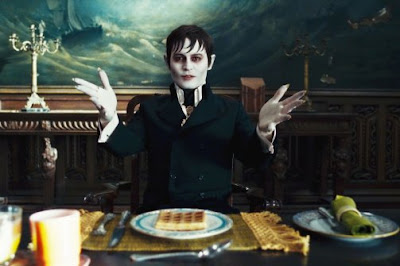 Tim Burton’s Dark Shadows doesn’t require a deep knowledge of the '60s gothic-horror TV show, but it helps—and my glossary and character gallery explain all!

Over at The Daily Beast, you can read my latest feature, "Dark Shadows for Dummies," in which I offer a fairly comprehensive glossary of characters, terms, and places from 45+ years of Dark Shadows continuity, several series, films, and a plethora of other materials. What is Parallel Time? Who is Angelique Bouchard? What is Widow's Hill? It's all in here.

In the more than 45 years since Dark Shadows first premiered as an afternoon soap opera on ABC in June 1966, the series created by Dan Curtis has spawned numerous feature films, novels, television series, comic books, and even hit singles. Evolving from a standard soap opera into a supernatural horror-fest—overflowing with vampires, witches, ghosts, and H.P. Lovecraftian ancient beings (remember the Leviathans?)—Dark Shadows was a forerunner for many of today’s spine-tingling TV shows and films.

Revolving largely around tortured vampire Barnabas Collins (and, initially, around governess ingénue Victoria Winters), Dark Shadows offered thrills, chills, and unintentional laughs, thanks to rapid-fire production times and frequent flubs (such as actors forgetting lines, the sets swaying, crew members wandering onto the set, or the boom mic being visible), but it has also found a legion of fans new and old for its imaginative world and what might be the first depiction of a remorseful vampire.

With the May 11 release of Tim Burton’s feature film version, which stars Johnny Depp as bloodsucker Barnabas Collins, it’s time to either brush up on your knowledge of Dark Shadows or dive into the world’s complex and often confusing mythology for the first time. What is the difference between Collinwood and Collinsport? What is Parallel Time? What was House of Dark Shadows?

We delve into the original 1966-71 ABC soap, the 1991 NBC revival series, and beyond to offer you a glossary of Dark Shadows’ most common terms, characters, and concepts.

Angelique Bouchard: A vengeful witch in the 18th century who is responsible for the curse that transforms Barnabas Collins into a vampire after he spurns her for his true love Josette DuPres. She is played by Eva Green in the 2012 film; previously, the role has been filled by Lara Parker and Lysette Anthony, as well as Ivana Millicevic in the unaired 2004 pilot. (See also: WB Pilot, The.)