The Daily Beast: "The Woman Behind New Girl" 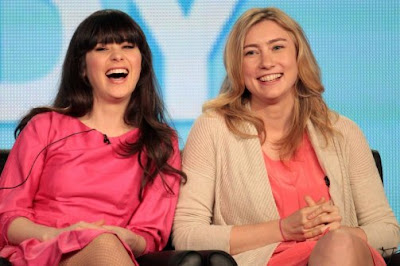 As the first season of Fox’s breakout comedy New Girl comes to a close, creator Liz Meriwether talks to me about the blowback over star Zooey Deschanel and her character Jess’s “adorkable” qualities, the show's handling of sexuality, and girl-on-girl snark.

Over at The Daily Beast, you can read my latest feature, "The Woman Behind New Girl," in which I sit down with New Girl creator Liz Meriwether to discuss the show's first season as a whole, reactions to Jess and her "adorkable" qualities, the show's handling of sexuality, girl-on-girl snark (particularly surrounding New Girl and Girls), and more.

One of the few comedy hits of the season, Fox’s New Girl, wraps its first season Tuesday night.

Created by Elizabeth Meriwether (No Strings Attached), New Girl revolves around a socially awkward teacher, Jess (Zooey Deschanel), who—after discovering her boyfriend has cheated on her—moves in with three guys (Max Greenfield, Lamorne Morris, and Jake Johnson) and discovers that they are just as neurotic as she is.

At 30, Meriwether might be one of the youngest television show creators in Hollywood. Arriving fresh from a dental cleaning, she was sporting similar eyeglasses to the ones Zooey Deschanel’s Jess dons on the show. Meriwether’s been known to spend the night at the office and says coffee is her fuel. “Honestly, other people’s brilliance and creativity gets me through the day and pushes me to keep thinking about the show,” she said, sitting in her office on the Fox lot in Los Angeles. “Because there are definitely times that I want to curl up with Upstairs, Downstairs and disappear.”

The Daily Beast caught up with Meriwether to discuss the evolution of the show, its handling of Jess’s sexuality, girl-on-girl snark, the breakout character of Schmidt (Greenfield), and more.

“The characters don’t have to be symbols of a bigger movement. I feel like we are really past that.”

One of the things the show has done so well is transform the notion of an awkward girl moving in with three guys into a study of group neuroses, gender, and the ways in which makeshift families are constructed. Was this always the goal?

That makes it sound really smart. The show was always about this ensemble. The way that I had always pictured it was four or five weirdos living together and trying to figure stuff out. Zooey [Deschanel] is such an amazing presence and such a great ensemble member herself. The show is growing towards everybody having their own stories and people being interested in all of the characters, which I think is great. For our show to work, you need to see it as an ensemble and not just one person’s show.