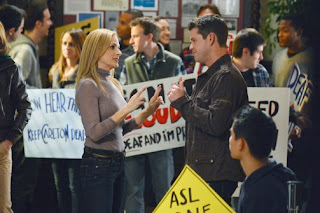 Almost 25 years to the day after the student protest at Gallaudet University began in 1988, ABC Family’s ‘Switched at Birth’ features a storyline about a deaf student uprising in an episode, airing March 4, that’s told almost entirely in American Sign Language.

At The Daily Beast﻿, you can read my latest feature, "Do Not Adjust Your TV: ABC Family’s Switched at Birth ASL Episode Recalls Gallaudet Protest," in which I offer praise of ABC Family﻿'s extraordinary Switched at Birth﻿, which presents a nearly all-ASL episode on Monday, a landmark installment that connects both to Deaf culture/history and to the seminal 1988 Gallaudet student protests (DPN). Not to be missed.

A generation has passed since the weeklong act of protest known as Deaf President Now, and its influence on deaf culture is likely a distant memory for the hearing community. That may change, however, thanks to a pivotal and landmark episode of ABC Family’s Switched at Birth, which will present a television first: an installment that is enacted nearly entirely in American Sign Language (ASL).

For the deaf community, the Gallaudet University students’ uprising was a metaphorical crossing of the Rubicon, just as vital and significant as Stonewall or Rosa Parks. It was a momentous act of revolution that has remained a critical cultural and social touchstone, reaffirming deaf identity, culture, and pride.

In 1988, Gallaudet, the world’s first higher educational institution for the deaf and hard of hearing, had just announced as its seventh president yet another hearing appointee. Elizabeth Zinser, assistant chancellor at University of North Carolina at Greensboro, had been the only hearing candidate for the job. Jane Bassett Spilman—chairwoman of Gallaudet’s board of trustees, largely made up of hearing individuals—announced Zinser’s appointment and defended the board’s decision by allegedly saying, “The deaf are not yet ready to function in the hearing world.”

Furious, deaf and hard of hearing students barricaded Gallaudet’s gates, refusing to leave and denying anyone entry until a deaf person was appointed as university president. Effigies of both women were burned during Deaf President Now (DPN), which received national coverage in the media.

In the end, Zinser would resign from her position, the university’s first deaf president, I. King Jordan, would be appointed after 124 years, and more than 2,500 protesters would converge on Capitol Hill, holding banners that read, “We still have a dream!”

Today, outside the deaf community, pioneers and crusaders like I. King Jordan; Laurent Clerc, America’s first deaf teacher; and Jean-Ferdinand Berthier, a deaf intellectual and political organizer who wrote about deaf culture and history, are sadly all but unknown.

But the ASL episode of Switched at Birth—titled, fittingly, “Uprising,” and airing March 4—will bring fresh attention to the Deaf President Now movement at Gallaudet, recalling a time of deaf activism that continues to inspire a new generation of students today.

For those not familiar with Switched at Birth, the show, created by Lizzy Weiss and now in its second season, charts the collision of cultures, identities, ethnicities, and classes when two teenage girls (Vanessa Marano’s Bay Kennish and Katie Leclerc’s Daphne Vasquez) discover that they were switched at birth and their respective parents convene in a blended family to become reacquainted with their biological children.

The drama, which won the Television Critics Association award for youth programming last year, isn’t just about the drama that ensues after the switch is discovered. It is a deft and sophisticated look at the way we communicate and express ourselves; whether through ASL, street art, or music. Switched at Birth is also the most nuanced and complex depiction of deaf culture and individuals ever to air on television. It’s all the more astounding that what unfolds before us—intelligent, emotionally resonant, and even profound—is packaged in what is nominally a teen drama.