The Daily Beast: "Downton Abbey Crashes" (Or My Thoughts on the Controversial Season Finale) 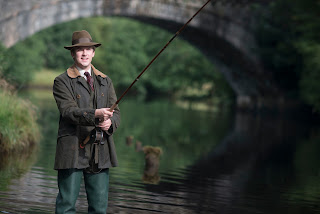 My take on the frustrating finale of Downton Abbey, which ended its spectacular third season with heartbreak. WARNING: Spoilers ahead if you haven’t seen Sunday’s episode.

At The Daily Beast, you can read my latest feature, "Downton Abbey: Why Last Night’s Season Finale Has Fans Seeing Red," in which I offer my thoughts about the controversial Season 3 finale, which aired last night on PBS's Masterpiece Classic.

He had to die.

There was no other way for Dan Steven’s Matthew Crawley to leave Downton Abbey other than in a body bag. As the heir to the grand estate and the title, it would have been impossible for sensible, responsible Matthew to shirk his responsibilities and head to America to start a career on the New York stage, or—to borrow from Monarch of the Glen, a Scottish Highlands-set drama that featured Downton Abbey creator Julian Fellowes as part of its cast—to go climb a mountain somewhere.

No, Matthew Crawley was not only wedded to Lady Mary (Michelle Dockery) but to the great house itself, and there was no getting around the fact that, in order to accommodate actor Dan Steven’s desire to leave the show, Matthew had to be killed off in some fashion.

It’s the means in which Matthew was unceremoniously dispatched that I take some umbrage with, however. I raised this point in a vague fashion in my advance review of Season 3 of Downton Abbey back in January, giving the season a glowing recommendation while criticizing the heavy-handed finale.

After a season that was particularly top-heavy with death—the gutting demise of beloved Sybil (Jessica Brown Findlay)—and disappointment, Matthew’s death threatens to topple the entire show with its melodramatic weight. And, let’s be honest, the minute that Lady Mary gave birth to a son, ensuring the continuation of the dynasty and a rightful succession (lest we be plunged right back into another entail drama like Season 1), Matthew was a goner. He had served his purpose, ensuring that the Crawley line would continue and that Downton Abbey—which he had absolutely and completely saved by dragging it and Robert Crawley (Hugh Bonneville) into the 20th century—would not only remain in the family, but also turn a profit.

Matthew was, in essence, a stud bull. His only purpose was to father a son. With that act completed and Downton saved, what was Matthew’s future importance within the narrative? Other than potential squabbles with Mary—serving again to prove how headstrong she is—where would the drama have come from? His plots were tied up way too neatly for him to survive, in other words.

The rabid fans of Downton Abbey wouldn’t accept another actor playing the dashing and modern Matthew, nor would they have accepted a flimsy excuse for why Matthew had decamped to other climes. But what I found frustrating was how Fellowes orchestrated his demise, having Matthew run off the road by an errant milk truck after joyfully greeting his baby boy for the first time. It was maudlin and too predictable, especially compared to the way in which Sybil had just been sent out of the world a few episodes earlier. Sybil’s death rocked both the audience and the show itself, a brutal reminder of how far medicine and childbirth have come in the last 100 years and also how wealth and privilege don’t always insulate families from loss and harm.