The Daily Beast: "House of Cards: Should You Binge-Watch Netflix’s Political Drama?" 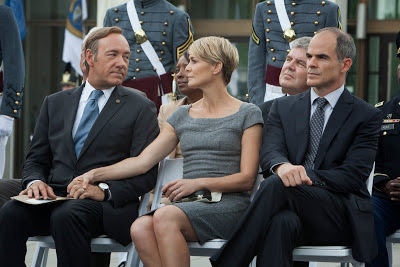 Netflix just released all 13 episodes of its first original show. Having binge-watched all 13 episodes this weekend, I ponder whether the strategy behind House of Cards represents a new narrative format for television—and if it could backfire.

Over at The Daily Beast, you can read my latest feature, "House of Cards: Should You Binge-Watch Netflix’s Political Drama?" in which I discuss binge-viewing and Netflix's strategy regarding House of Cards. Is this television's new narrative form?

Bet you can’t eat just one.

A lot has been written lately about consumer patterns and television, specifically the rise of what has been coined “binge-watching” or “binge-viewing,” the practice of marathoning an entire season or multiple episodes of a television show in a highly concentrated period of time. It might occur during a single evening or over the course of a weekend, but the notion of consumption is apt. Netflix, the streaming video service that started out as a distributor of DVD rentals by mail, has made this practice far easier than ever before, offering a catalog of full seasons of past television shows. Why wait a week to watch another episode when there are 108 more available and you can sate your hunger by just clicking away?

Binge-watching is not new—IFC’s Portlandia did a sketch about a Battlestar Galactica-obsessed couple whose lives go into freefall after they marathon the entire series—but talk of it has intensified since Friday’s release of House of Cards on Netflix. The streaming-video pioneer released all 13 episodes of Season 1 of House of Cards on the same day, a potentially paradigm-shifting strategy that pokes a sword in the belly of the broadcast networks, who are beholden to advertisers and time slots, and therefore the slow rollout of product.

Netflix doesn’t have these concerns. It features no advertising, is a subscription-based service (like premium cablers HBO and Showtime, original programming exists to drive subscriptions), and doesn’t feel the need to share “ratings” or compete in the same ratings-obsessed pool with the broadcasters. The strategy behind the mass release of House of Cards, the American remake of the seminal 1990 U.K. miniseries of the same name, is that viewers deserve choice. If they want to watch all 13 in a row, more power to them, but the platform isn’t reliant on a single timeframe for viewing. If a consumer decides to watch a few and then pick it up a year from now, it doesn’t matter.

That belief is echoed by Beau Willimon, House of Cards’s showrunner. “It’s fully in the audience’s hands to decide what their own experience is,” Willimon said in an interview with The Daily Beast in January. “The same way that you read a novel. You can read Anna Karenina in two days, or you can read it over a year. And I think that’s better because it personalizes the experience.”

It’s this semblance to the novel that seems particularly apt. The narrative of House of Cards, itself based on a novel by Michael Dobbs, is largely dependent on a novelistic structure. The episodes are even referred to as “chapters” in an effort to underscore this comparison more deeply.

The entire narrative benefits from the close scrutiny of novel-reading, or of similarly ambitious and novelistic shows like Mad Men or Breaking Bad. A paper swan, made of a $20 bill and tossed at Claire Underwood (Robin Wright) in one episode, turns up repeatedly throughout the back half of the season. It represents her own unknowable quality, a tightly bound mystery that’s contorted and bent.