BuzzFeed: "The Doctor Is In: Matt Smith On Leaving Doctor Who, A Female Doctor, And More" 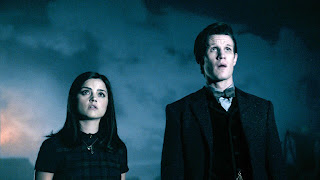 The 30-year-old actor will depart cult British sci-fi drama Doctor Who after this year’s Christmas Special. Here's what he told BuzzFeed about his decision to leave, the possibility of a female Doctor, stealing socks, and more.

At BuzzFeed, you can read my latest story, "The Doctor Is In: Matt Smith On Leaving Doctor Who, A Female Doctor, And More," in which I sit down with Doctor Who star Matt Smith to discuss his decision to leave the British science fiction drama, the possibility of a female Doctor, and what's next for him.

Matt Smith is wearing bright turquoise socks. The 30-year-old star of Doctor Who is lolling around on a leather couch deep within the cavernous confines of the Beverly Hilton Hotel in Los Angeles, a day before he’s set to appear on a panel celebrating the 50th anniversary of the British science fiction drama at the Television Critics Association summer press tour.

When I draw attention to his socks (they coincidentally match the shirt I’m wearing), Smith proudly draws up his trouser leg to take a closer look. “They’re a similar color to your shirt!” he says, enthusiastically in a fashion not unlike the Doctor himself. “I always steal a pair of socks on every photo shoot I do.” He pauses. “It’s my thing.”

Smith looks drastically different from his on-screen persona as the Doctor, having transformed himself to play a tough guy in Ryan Gosling’s directorial debut, How to Catch a Monster, which will be Smith’s first appearance after he wraps up his tenure on Doctor Who later this year. There’s the 50th anniversary special airing November 23rd (on BBC One in the U.K. and BBC America in the U.S.) and then the Christmas Special, where the Doctor will regenerate into… Well, who knows who he’ll become yet? Neither Smith nor executive producer Steven Moffat are giving us any clues about which actor (or actress?) might step into the role and play Number Twelve. What follows is an edited transcript of the conversation between Smith and BuzzFeed.

How liberating is it to leave behind that Doctor Who coif and the bowties?

MS: I’ve got to be honest, it is quite liberating. Although I’m putting Miracle-Gro on it because I need to get it back for September to go and shoot the regeneration [scene]. But it is freeing, shaving it off. Walking round at Comic-Con, people didn’t recognize me as much. Just generally, people recognize me much less, and that’s quite nice as well, because you can be more anonymous.

MS: I went up to the BBC America booth and I tried to talk to people, but I put on an American accent. I was like, “Hey, how’s it going, man? I like your TARDIS thing,” and whatever and no one wanted to talk to me! There was one girl in particular who had a backpack on with Tom Baker-y straps like a scarf. And I was really trying to talk to her and she was just not interested.

At what point did you know that it was time to move on from Doctor Who?

MS: It’s something that I was considering for a while. It’s one of those jobs where there’s never a right time, because part of you just wants to do it forever. It’s such wonderful storytelling and it’s the most wonderful character and it’s the most wonderful cast and crew, and so much about it is right. I think you have to keep challenging yourself and keep challenging the show. For the show, it’s the right time and it will re-galvanize it. The show will get bigger and better, and I’ll become a fan and look back on my time and just go, “I’ve had the most wonderful journey.”
What was the conversation like that you had with Steven Moffat about your decision?
MS: To be honest with you, it’s, that’s something that I’d like to keep private, because it’s a private conversation and Steven is a dear friend of mine. It was something that we talked about a while ago as well, in rough terms. In my head I just knew that, after the 50th anniversary, I’d look at retiring the bow tie, as it were.

But Steven was supportive, I imagine.

MS: Yeah, yeah, he was. But obviously as well, it’s one of those things. It wasn’t easy for both of us because we’ve worked together for three years, and creatively and personally, we’re close. Part of me would have liked to have continued and finished the journey with him, but also, for me, I just felt like it was time for a change of lifestyle.