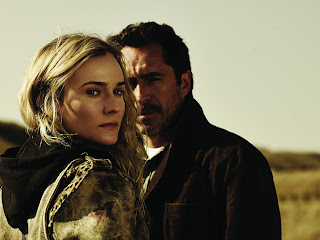 FX’s The Bridge, about a serial killer investigation that entangles both sides of the U.S.–Mexico border, is very good. If you haven’t seen the Danish-Swedish series it’s based on, you might even think it’s great.

At The Daily Beast, you can read my latest story (one of my very last ones, in fact), "FX's Border-Killer Thriller," in which I review FX's The Bridge, based on the Danish/Swedish drama Broen, which begins tonight at 10 p.m. on FX.

Borders are complex signifiers, reinforcing both national and cultural identities as well as distinguishing between outsiders and insiders. Where you are, how you see yourself, depends largely on what side of the wall—visible or invisible—you’re standing on at the moment. Few modern-day national borders are as fraught or as psychologically charged as that between the United States and Mexico, a nearly 2,000-mile line in the sand that is the most frequently crossed international border in the world.

It’s this international way station that acts as the backdrop for FX’s provocative new mystery thriller The Bridge, which is based on the Danish/Swedish drama Broen and which begins its 13-episode run Wednesday night at 10 p.m. The American adaptation of the hit drama series (a ratings success in the Nordic region as well as in the U.K.) moves its crosscultural concerns away from Scandinavia, instead exploring the socioeconomic, psychological, and cultural effects of the border between the U.S. and Mexico and two detectives from either side of the divide.

When the corpse of a woman is discovered in the middle of the Bridge of the Americas (also known as the Cordova Bridge), which links El Paso, Texas with Ciudad Juárez, Chihuahua, each country claims jurisdiction over the incident. As the bridge is shut down while the identity of the victim is ascertained, detectives Sonya Cross (Diane Kruger) and Marco Ruiz (Demián Bichir) square off over whether an an ambulance—carrying a wealthy American citizen in the throes of a heart attack—should be allowed to cross the border.

It’s the first time that these two disparate people—American and Mexican, female and male, introspective and gregarious—have met, and the collision between Sonya and Marco informs much of the drama to come as they are forced to work together to track down an insidious and intelligent killer. The woman on the bridge, as the detectives come to learn, isn’t just a single corpse: the top half and the bottom half belong to two separate victims, one an American judge and the other an unknown female, one of former murder capital Juárez’s hundreds of slain women in the last 20-odd years, whose continued disappearances and deaths now register barely a mention in the American media.

The killer, it seems, has a need to bring to light some of the shocking inequalities between the U.S. and Mexico, but he is no crusader. Instead, he—or perhaps she—delights in causing mayhem on both sides of the border, illuminating the travesties facing those trapped by the border while simultaneously perpetuating them. He has a drive to create both carnage and impact, and he reaches out to Daniel Frye (Matthew Lillard, appropriately smarmy here), a drug-addicted newspaper reporter working well below his potential, in order to cast his message even wider.